So knowing all that, let’s just say the 123 minutes crosses every line imaginable. Every terrible thing one can imagine probably happens at some point in the montage of deadly shorts. And while a lot of it can be construed as, for a lack of a better term, playful, it’s still quite graphic to behold.

Letters Q – Z, for whatever reason, had the most substance to them (which may not be saying much). You can find some sort of meaning within the context prior to the climatic death blow in this closing batch. As for the others, well sometimes the only intelligent thing about them is their titles; which may not make total sense with what unfolds in the short (i.e. Death by Klutz).

Take this as a positive, if you can stomach watching this unrated romp, but no two films are alike. There are even a handful of animations that nullify the monotony of essentially watching a warped countdown. More than half the flicks are from foreign markets, so there are subtitles. Hell, some of these don’t come with dialogue, but trust me. The screen images and/or characters’ actions say enough. In the referenced Q – Z segment, along with a few others outside that grouping, there is an occasional provocative thought/message being woven in. But let’s be serious, this product as a whole is predominantly creative torture porn. 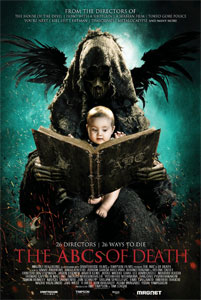