It’s too bad that Socrates could not be alive today to see “Before Midnight.” Aside from marveling at the Greek textures of the southern Pelponnesian peninsula that photographer Cristos Voudouris captures on celluloid, he’d be proud to note that two and one-half millennia after his natural life, people still gathered around the table to discuss the meaning of love, of relationships, the differences between men and women and the ways we love and judge literature. In short, the meaning of life.

“Before Midnight,” scripted by the two principal actors and director Richard Linklater, pays homage to the Greek unities: time, place, and action. All the action takes place on a single day before midnight, with a single story line, and in the same area. And what a difference a day could make! This day in the Greek sunshine should have been virtually stress-free but instead the town of Messena forms the backdrop of an argument between man and woman that could easily have fractured their long association. The contretemps is preceded by metaphoric foreplay, if you will, as Patrick (Walter Lassally), an older writer plays host to Jesse (Ethan Hawke) and Celine (Julie Delpy). The invitation is motivated by Patrick’s admiration of the best-sellers that Jesse has penned which may or may not be based on the writer’s life with Celine.

“Before Midnight” is the third of what is not likely to be merely a trilogy but one that will continue, like the documentaries “Seven-Up” and “56-Up.” In “Before Sunrise,” the first segment which takes place in 1994, Jesse and Celine are on a train in Europe. Jesse, looking at a long shot, invites Celine to get off the train with him to spend the day in town. When they depart, they do not exchange numbers (most unusual in this day of smart phones) but agree instead to meet six months later—a meeting that does not take place as scheduled but comes to fruition when they get together during Jesse’s Paris book talk. Their day is the subject of “Before Sunset,” which leads to Jesse and Celine’s living together in Paris as Jesse is now divorced with a young son from his first wife and now with a pair of adorable twin girls from Celine.

A lively round of discussion at a farewell dinner at Patrick’s behest includes among other a young Greek couple that had met at an outdoor theater. This is the segment that Socrates would have favored, though the philosopher might have also smiled upon seeing Jesse’s leading his son to the Kalamata airport as they profess their love and note the boy’s warning that his mother hates Jesse.

The modern audience however, will tune into the rage, one which lasts a half hour, totally scripted without improvisation, when Jesse and Celine arrive at a hotel. As Celine parries with the thought that she is oppressed, Jesse thrusts by sarcastically calling her middle-class life in the shadow of the Sorbonne downtrodden. As they discuss what might have been—most poignant when Celine wonders whether Jesse would have preferred staying in Chicago but not without ribbing him about how bimbos must have slobbered over him during his book tours. Their entire twenty years’ relationship is on the table, as Celine walks out the door three times, the final moments sitting by an outdoor café thinking that she is going to spend the rest of her life alone.

This is the sort of movie that could stand up well to French cinema, the latter with its penchant for lots of good talk and little action other than interior ones, that is what is going on in the people’s heads. Cinema buffs might compare the inner action to the long discussion in Louis Malle’s 1981 movie “My Dinner With André,” which pits Wallace Shawn against André Gregory, while at the same the fierce fighting could make Ingmar Bergman happy, seeing how he might have inspired the argument with his 1973 TV mini-series “Scenes from a Marriage.” “Before Midnight” would satisfy not only Socrates but any sophisticated audience member looking for solid acting with superb comic timing and most of all a script that all but says that the screenwriter is the vital force in the making of a film. 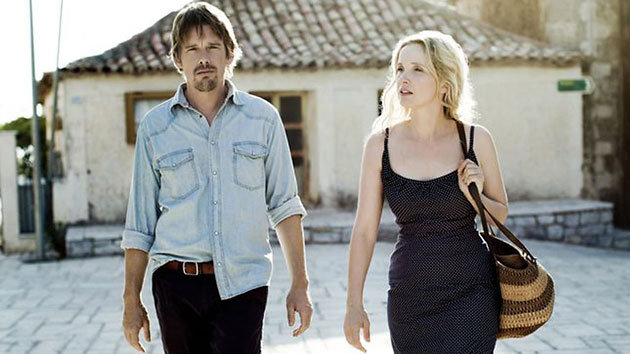