In actress-turned-director Maggie Kiley’s engaging feature debut, “Brightest Star,” New Zealand native Rose McIver plays Charlotte, one of two young women that Chris Lowell’s recent college graduate has a relationship with as they all attempt to navigate their early twenties. For ShockYa, Brent Simon recently had a chance to speak to McIver one-on-one and in person, about the movie, Los Angeles, accents and ambition. The conversation is excerpted below:

ShockYa: I know the film has its roots in a short film, “Some Boys Don’t Leave,” that Maggie did. Did she talk a lot about that, and/or encourage the actors to use it as a resource?

Rose McIver: I think Chris and I both watched it before we went into this project. I mainly watched it because it was a reference before I even sat down and read the script, and before I sat down and talked to Maggie I wanted to know what she was like as a director and whether it was a project I would want to do. So I watched it purely out of curiosity, to know what her tone was like as a director. I knew she was collaborating with the same [director of photography], and so in terms of those things it was very useful. Once I had the role I didn’t watch it again because I felt like I knew what I needed from having seen it, and didn’t want that to influence my performance heavily. One’s a short film and one’s feature-length, so they have different arcs and different development, and I didn’t want to be trying to play notes of somebody else. I wanted to find my own organic way into the story.

ShockYa: In my review I called the film a work of twentysomething portraiture, because “Brightest Star” largely eschews traditional romantic and dramatic payoffs.

RM: In terms of the film being a portrait of twentysomethings, I totally agree. What I liked about it was that nobody… well, a lot of times as an actor you’re asking, “What’s my motivation?” And the problem with being in your early twenties is that your motivation changes, and is subverted. I know that’s what I’ve experienced since coming out of school — you think you know which direction you’re headed and then the ground is pulled out from under you. And so you try to find your feet again and go in a different direction. You kind of tack your way towards who you think you want to be, and where you end up is when you become slightly more settled in your identity. So I liked the film for its lack of absolutism and structure, and its exploration of questions rather than delivering answers.

ShockYa: It’s so honest about the depth of emotional weight attached to ambivalence, which I feel is a term often misused and misunderstood — because it’s not about wishy-washiness, it’s about being pulled in many directions at once, which can often create this choking desperation.

RM: Absolutely. My dad has always rather famously claimed that something he knows about his life is that he’s never made a decision. He doesn’t mean it to be, uhh, self-insulting — he’s saying that he’s said situations present themselves to him and kind of walked along with them or hasn’t pursued them. It’s not about being this fiercely ambitious, driven person. And I think that’s an interesting thing that we go through. I know in my life, yes, I like to work toward things but I also don’t like to be absolutely goal-setting in my mindset, because I think if it doesn’t go your way then you have to be able to adapt. And adaptability is what Chris Lowell’s character has that Charlotte doesn’t. So for Charlotte, when things don’t go exactly as she’s planned them to, she’s left more without the ground under her feet because she doesn’t know how to handle not knowing what she wants. So I think there’s lessons to be learned from both characters in it. And I think I can relate to that sense of thinking you know what you want and then realizing that things are much bigger and more confusing than they seem.

ShockYa: I would imagine that sense of absolutism would work against purposes for an actor, in many senses. You’re going to cause yourself a lot of pain and grief if any deviation from prescribed course really upsets you.

RM: And that’s why I do what I do. I love humans because we’re so contradictory — we can think and behave in a really strong way and yet have another part of us that pulls us in another direction. We have to be able to juggle that. That struggle and exploration is what’s interesting to me, and what made me do this for a living.

ShockYa: I identified with Charlotte’s kind of wistful and fanciful description of astronomy class, in which she basically says she’s drawn to the ideas of the lectures more than the specifics.

RM: That’s so funny you should mention that, because in high school I was quite good in English and interested in reading and humanities. And I always thought that I would be bad in maths and science. …But when I got to university I had to take a statistics paper for my first year of psychology, and I was absolutely devastated. I was like, “No, I want to understand people, and psychosis and syndromes! I don’t want to understand boring graphs.” But I got into this statistics lecture, and we actually had this amazing, insightful man who told us to lose any of the [preconceptions] we had about maths. Statistics is real-life maths, he said. And the way he explored it was very much in a way that was all about chance and serendipity and people meeting. And it suddenly became this language-oriented thing that I could understand. I think in school what we’re presented with as science or maths aren’t always the same as what we then experience based on a certain teacher. So I think there are different ways, and you just need to be explained in a way that makes sense to you.

ShockYa: What’s the key to your accent work, and crafting a good American accent?

RM: I think there’s a certain extent to which you’re naturally able to hear accents and create them again or you’re not, and I’m lucky that I do have an ear for [them]. But it definitely takes practice as well. Also, growing up in New Zealand we had a lot of British and American film and television, so those accents were never unfamiliar to me. It’s unfair to ask an American to be able to do a good New Zealand accent when all they’ve heard is “Flight of the Conchords,” you know? For me, it’s easier to draw on an American accent, but I’ve worked with dialect coaches over the years, and more to be point there’s idioms so it’s harder with improvisation because there’s turns-of-phrase that can difficult because you just don’t know that they don’t exist. It’s not actually a matter of the vowel sounds or anything like that.

ShockYa: You’ve lived in Los Angeles a couple years now, right? How do you like it?

RM: When I first arrived I absolutely hated it. I’d been here when I was about 17 for a week for a junket for something, and it was very overwhelming, and I just didn’t really find people I connected to very well. It was probably my head space too as well, but then I came back — about three or four years ago I started coming out here for several months at a time. And I think like most places it takes time to invest in the place and meet good people and build a community and find what you’re looking for. So after spending months and months here I started to find the pockets geographically and culturally that I was interested in, and now I have a great community of friends out here and am very, very lucky. I miss home a lot because of my family, and because we live between two incredible coastlines, but I’m also very grateful for what Los Angeles has offered for me work-wise and in terms of expanding my thinking.

ShockYa: “Brightest Star” takes place in the present day, and assays what I’d call delayed-onset ambition in a pretty interesting way, but it doesn’t really link it to what I think might be one of the factors driving it, which is an increasing reliance on technology and social media among younger generations.

RM: Technology is definitely a part of it. Pressure can do wonderful things, or definitely change things. If you have to provide for your family, or you’re going to have to leave home and pay rent and nobody else is going to pay it for you at a younger age, and you can’t pay for a higher education, you learn a trade or find your skill set and start working on it from an earlier age. I think the luxury problem of the first-world is that there is time to explore, which is great, and I’m certainly very grateful for that myself. But what happens with that is that suddenly you don’t have the obligation to know at an early age (what you want to do), or to make a decision. I know for me, I came out of school and thought, “Maybe I want to work in education, maybe I want to work as a speech therapist.” There were various things that I thought about, but I’ve been so fortunate that I’ve been able to work a part-time job when I’ve needed to, or take acting roles and think about that. If you don’t have mouths you’re worried about feeding or shelter you’re worried about providing, you find something to deliberate over. And I know for people who’ve grown up in a first-world environment, it’s certainly easier to deliberate over career and ambition. I know that growing up I thought that ambition was a really ugly word, coming from New Zealand where everyone is super laid back and you want to be content with where you’re at. It’s definitely not a personality trait that is celebrated in New Zealand — you’re more celebrated for just being cool with where you’re at. That’s kind of the vibe. I love that to some extent, because it makes for a very relaxing environment, but it’s also difficult if you have this artistic vein in you, where you want to make something, to generate something. And so for a long time I struggled with how I could be still be easygoing and appreciative of my environment but also still want to do something artistic with my life. Those two ideas, to an extent, I still weigh in my mind. And all I know is that this is an impulse in me that I’ve had to [follow]. And I think that’s one of the reasons this script was so appealing for me in the first place — Charlotte comes from an artistic family who have told her that she could do this, that and the other, and she’s ended up in this corporate world. She has too many options, too many directions that she could go, and then there’s a lot of pressure to decide which way works, and to be able to put that in your moral compass as well, and not think, “Oh gosh, I gave up love for the corporate job,” or whatever.

NOTE: “Brightest Star” is now in theaters, and is additionally available across VOD platforms. 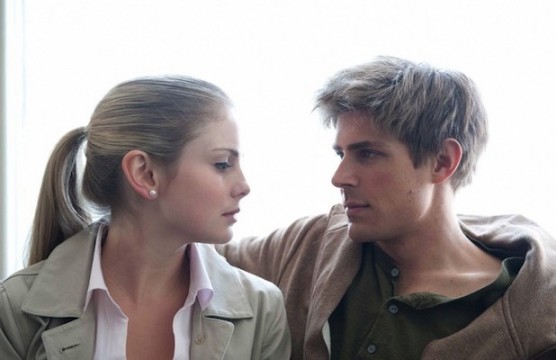