It doesn’t build its world as deftly as “The Hunger Games” and can’t compete with “Mean Girls’” smart wit, but “Vampire Academy” does manage to find a place for itself as a silly yet enjoyable variant.

First off, the must-know basics – there are three species in “Vampire Academy;” the Moroi are benevolent vampires that only drink the blood of willing human feeders, the Strigoi are an immortal, vicious breed of vampire that target Moroi because their blood makes them stronger, and then there are the Dhampirs, human-Moroi hybrids that train to become Guardians and protect the Moroi from Strigoi attacks.

Now meet Lissa Dragomir (Lucy Fry) and Rose Hathaway (Zoey Deutch). Lissa is a Moroi and Rose is a Dhampir, but both attend St. Vladimir’s Academy – that is until they decided they were better off on their own. After a year on the run, Lissa and Rose are caught and forced to return to St. Vladimir’s to continue their studies. While Lissa tries to shed her late-bloomer status and finally specialize in an element, Rose is playing catch-up for her combat courses by training with a mentor, a Guardian named Dimitri (Danila Kozlovsky). Despite making an effort to keep in line, the threat of school bullies has Rose on high alert. Trouble is, there’s something far worse than gossip brewing within the walls of St. Vladimir’s and as Lissa’s soon-to-be Guardian, it’s up to Rose to keep her safe from all threats.

You’re probably already aware of “Vampire Academy’s” #1 problem– exposition. Half the fun of Richelle Mead’s novel is that it’s a far fresher, more layered vampire realm. Rather than have to deal with the familiar scenario of a human running into a pack of vampires, Rose and Lissa are already part of an established society with rules that are dependent on morality and survival, something anyone can relate to. For example, Dhampirs don’t just protect Moroi because someone way back when decreed it so. The only way for Dhampirs to reproduce and make more Dhampirs is with a Moroi, not another Dhampir or a human. The Moroi need the Dhampirs to survive Strigoi attacks and the Dhampirs need the Moroi to continue their species. It adds texture to the world and gives you something to think about.

But of course, in order to be something you actually want to think about, the movie’s got to explain it first and in “Vampire Academy’s” case, that takes a lot of time and work. Minus Rose’s quips, almost every single line of dialogue in this thing is expository. However, as someone who’s familiar with the source material, the information overload didn’t take away from the experience. Plus, it’s tough to get bogged down by anything in this film because Mark Waters maintains a strikingly swift pace from start to finish.

“Vampire Academy” has thin character arcs, a number of jokes that are a little too silly, and a lot to digest in the 104-minute running time, but the Waters brothers manage to get away with it because of that quick pace, charming leads and the fact that they don’t take the scenario too seriously. When you’re bringing vampires to screen, it’s got to go one of two ways; either you approach it earnestly and make the world feel real or you have some fun with it, throw in some self-deprecation and establish a hyper reality. If you miss the mark attempting the former, you end up in “The Twilight Saga” zone where perhaps fans of the source material still dig it, but skeptics scoff. In this case, however, Mark Waters uses Rose’s sass, highly effective soundtrack selections and the snappy pace to present a scenario that may be ridiculous but embraces it, and uses a degree of self-awareness to give the experience even more momentum and bite. (No pun intended.)

And then there’s Deutch. Almost every single main player in “Vampire Academy” does an adequate job, but Deutch is above and beyond, proving that she’s got a serious chance at becoming a worthy big-name star. She’s got more gusto than the entire ensemble combined and it’s infectious. Whether it’s a drab line of dialogue or a plot progression that doesn’t make much sense, she’s there to support it through spot-on comedic timing and intonation, becoming a vital force to upholding Mark Waters’ tone.

But that leaves us with another major flaw, the lack of drama. “Vampire Academy” works because it’s a fun film, but the lack of slower, more emotional moments leaves it without very many fully realized relationships. The connection between Rose and Lissa and the one between Lissa and Christian (Dominic Sherwood) are winners, but the romance between Rose and Dimitri is an impossible sell. As someone who read the book, I know what’s going on, but it’s also quite obvious that for the rest, there’s nowhere near enough development to understand Rose and Dimitri’s connection or just to buy that Deutch and Kozlovsky could be a match.

The adult characters are almost all total lost causes. Joely Richardson’s minimal screen time is completely insignificant. She could and should have been written out of the film to give more time to Olga Kurylenko’s Headmistress Kirova. This is easily the most one-dimensional role in the film. Kirova’s actions have no motivation whatsoever beyond being the all-business principal of sorts and, even worse, her scenes are so poorly written it’s a wonder Kurylenko was able to perform them with such sincerity. Claire Foy had something going with Ms. Karp, especially with the eeriness that comes with not blinking throughout the entire film, but Daniel Waters really misses the mark in terms of using Ms. Karp’s storyline to build Lissa’s predicament.

“Vampire Academy” isn’t a particularly well-made book-to-film adaptation, but that doesn’t mean it isn’t fun and there’s nothing wrong with going to the movies, letting loose and getting a little silly. Ultimately, the bad will likely outweigh the good and turn this potential franchise into a fleeting film fad, but for now, there’s no harm in giving it a go for the sake of a quick, upbeat laugh and thrill. 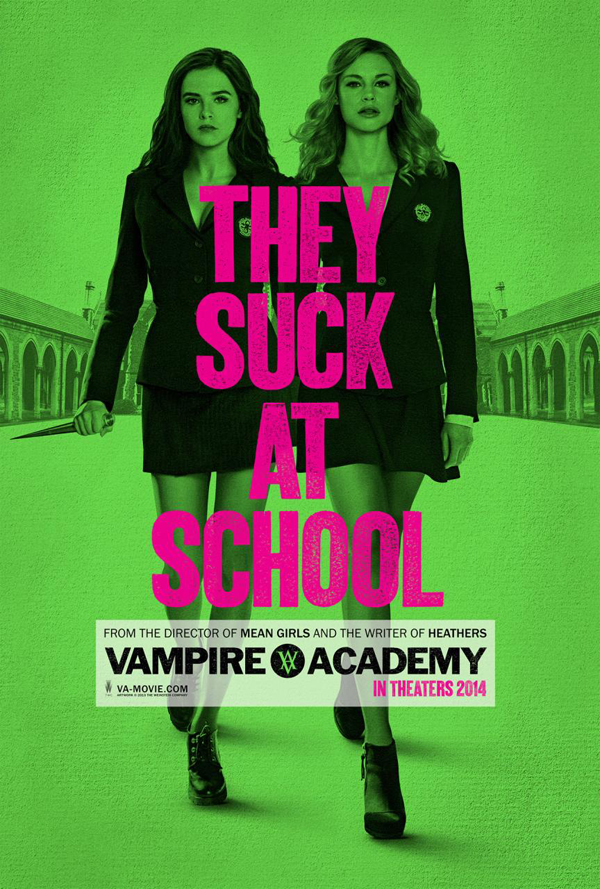