After arriving in Istanbul on a bright day in May 1998 we stepped into an unknown land. Since we did not speak Turkish and the locals did not speak English or French we had to rely on hand movements and facial expressions. After eating a few Borekes, Baklava and drinking black tea we realized that this was going to be a fun-filled week even without understanding the local language.

Jack Dwyer (Owen Wilson), however, faces a different outcome in No Escape. A water engineer by profession Jack was given a new assignment in the fictitious Asian country of Lasia. He had to uproot his immediate family from Texas, take a long airplane ride, and settle into the only European style hotel in town. Problems start upon their arrival: electricity works on and off, telephones are not operational, the internet does not exist, television stations ceased to deliver news, and the last English newspaper was printed three days prior. Jack calls it a Third World country but his wife Annie (Lake Bell) says it is a Fourth. His daughters Lucy (Sterling Jerins) and Beeze (Claire Geare) are not happy about the situation either.

Unknown to the Dwyer family Lasia is going through a major rebellion. After top military heads in the government have been assassinated armed mob rules the streets. Immediate victims are foreigners that get killed, based on their looks. Jack is given an advice by Hammond (Pierce Brosnan), an Englishman that visited Lasia many times: “Cross the river and ask for political asylum in Vietnam”. Jack, his wife and daughters will spend the next 90 minutes of No Escape trying to do so, while overcoming many obstacles.

Director John Erick Dowdle keeps up the suspense in this family action thriller while relying on hand-held camera for the long chase scenes, while cinematographer Leo Hinstin utilizes various locations in Chiang Mai, Thailand, standing in for Lasia. A significant amount of stunt work is done by Genevieve Aitken, as a double for Lake Bell and Warwick Sadler for Pierce Brosnan.

Owen Wilson gives a sincere but limited range performance as Jack Dwyer, repeating: Are you OK? many times. Lake Bell, however, is convincing as the accessory wife who has to accompany her husband on various work assignment. The parts of Lucy and Beeze, the two daughters, are underwritten and leave them with very little to do except for pouting and sobbing. Pierce Brosnan gives Hammond some dry British humor and character, which is missing from other players’ parts.

After watching the mayhem in Lasia for 103 minutes, you may look at Vietnam and wonder whether it is the next Shangri-La!

Story: B-
Acting: B
Technical: B
Overall: B- 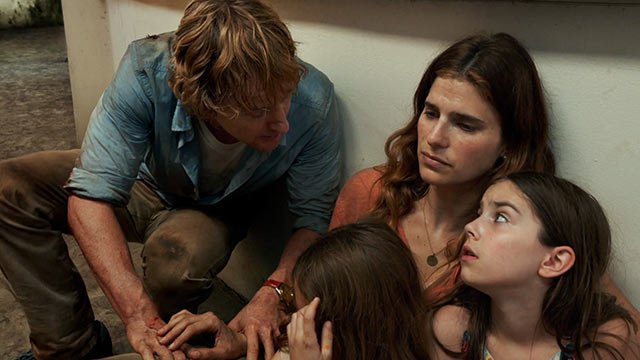