Embarking on a journey of personal expression is a vital experience for everyone throughout their lives. But that event is even more rewarding when people are able to break barriers, and become leading pioneers in their field. Kiira Benzing is one such fearless filmmaker who’s continuously proving how important female voices are in all areas of media. As a director who has crossed the mediums of theater, hybrid cinema and AR, she’s now an award-winning filmmaker in VR; she was honored with the Virtual Cinema Jury Award in the Interactive category for her interactive dance experience, ‘Runnin,’ at last month’s SXSW.

Set in a retro-future world, ‘Runnin’ takes players on a journey of musical expression, as it allows them to play along with the music of Wajatta in an intimate neighborhood record store, and then be transported to a dance party. Players can show off their moves on the dance floor alongside a troupe of dancers and Reggie Watts. The VR exhibit features music by WAJATTA, Watts and John Tejada, as well as cutting edge volumetric capture.

‘Runnin’ is the first music video and first VR experience filmed at, and produced by, Intel Studios in Los Angeles. Benzing is the first female filmmaker to direct over 75 cameras on the Intel Studios stage. Not only did she helm the interactive dance experience, but she also wrote it, and along with Watts, also served as one of its executive producers.

The interactive dance experience made its World Premiere at the Sundance Film Festival in January. ‘Runnin’ then made its Texas premiere at SXSW in the Virtual Cinema exhibit at the JW Marriott.

Benzing generously took the time during SXSW to sit down near the ‘Runnin’ exhibit at the JW Marriott for an exclusive interview. Among other things, the filmmaker discussed that she feels having more women work on VR experiences is important, as they can bring a unique perspective to the medium. She also cherishes the experience of bringing the VR experience on the festival circuit, as she’s able to see how fans genuinely react to it.

The conversation began with Benzing explaining how she became involved in writing, directing and producing ‘Runnin.’ “I met Reggie Watts at Sundance last year, and he was at a party. I always wanted to work with him. There’s also a choreographer who I’ve always wanted to work with, who’s a mutual friend of ours. So I asked (Reggie) if we could work together with this incredible dance company and his incredible music in VR, and he said, ‘Cool,'” the filmmaker revealed. “Now here we are; we had our World Premiere at Sundance this past January, and we’re now having our Texas premiere at SXSW.”

Benzing then followed up on the process of working on the choreography for the VR dance experience. “We had two choreographers, Ani Taj and Amy O’Neal, who are both powerhouse women and incredible dancers. They have different styles, but were able to bring those styles together,” the helmer shared.

“They both also helped cast the production. Diversity was really important, because I want the player who’s inside the experience to feel like they can see themselves, and like they belong, and are welcomed, in this world. So I wanted the cast to represent everyone. Even though we were going to also add these magical VR effects to the dancers, we also want everyone to feel as though they belong,” Benzing also divulged.

Further speaking of the casting process, the filmmaker added that “Ani brought some dancers on from her dance troupe, The Dance Cartel. In fact, she had brought on a woman who had just given birth, and was a new mother. We actually had her tiny baby on the set. She would run off between takes to nurse her baby, and then jump back on stage and kick her legs so high, and dance with so much intensity and power. That was really incredible,” Benzing gushed.

“The other dancers came from Amy O’Neal; she brought in people she had worked with in Los Angeles. So the pulled this cast together. They sent me Instagram links, and asked me what I thought of each dancer. Everyone they found was a yes! So we had this beautiful, vibrant cast,” the director declared.

Benzing would also remind the dancers between takes “that there’s a player inside of this experience, so they’re at their own dance party with you. So we want to invite them and make them feel welcome. So remember what you’re doing with your body to make them feel welcome as you’re dancing with them,” she relayed. “Since the cameras are everywhere in this dome at Intel Studios, remember to keep your head up, and a smile on your face,” she noted. “They just shined with their positive attitudes.”

The dancers on the set received some instructions from Taj and O’Neal about their dance routines, but were also encouraged to create some of their own dance moves. “We had some rehearsals with Ani, Amy and the dancers. We also had some freestyle moments, where the dancers brought their own flavor and energy to the dance floor,” the filmmaker revealed. “But we also had some loops that we included in the experience, because we had to shoot in short bursts.”

Also further mentioning the experience of shooting in the dome, Benzing shared that the Intel Studio has a “10,000-square foot stage, which is the largest stage I’ve directed on. It’s a rare opportunity for a woman to get to direct on a stage like that. At the time that we filmed, there were 76 cameras, which is a lot,” she admitted with a laugh. “I’ve previously shot VR and AR in a way that the cameras are on a rig in the center, and they’re facing outward. So I’ve shot with a fair amount of cameras, but never 76!

“At the studio, the cameras were also all around us, and facing inward. Working in this new way was exciting for me. I tend to work spacially as a director. I’ve been working in VR and AR for several years now, and love experimenting with interactive techniques, and it’s definitely different on each project,” the helmer admitted. “You’re never shooting the same frame twice. The cameras are always configured in this completely different way, and are capturing everything three dimensionally.”

Having more women work on VR experiences is something that Benzing feels is important. “I think that we need the perspective of women, and feel that we haven’t had enough stories from them. The perspective of a woman sitting in a writing or board room is important, because we bring a different perspective. When important creative decisions are being made, especially those that can change the path of the project, and you don’t have a women there to defend our perspective, things can go off in an ugly course.”

The filmmaker added that she felt fortunate that she was able to “bring a lot of powerful women to key departments, and be the leaders. Our two choreographers were women. Our costume designer (Shari Bisnaught) and hair and makeup artist (Jenna Nelson) were also women. They, in turn, hired women to support them. To see so many women on a crew is so rare.”

Having the participants first enter ‘Runnin’ through the record store was also something that was important to Benzing. “I wanted a three-act structure in the story, so the store is meant to allow people to become familiar with the activity that they’re going to do. It also introduces people to this world, which isn’t normal; it has neon colors, and as the users move, things are coming to life. So people will know that they’re not in a normal reality, but there is a nostalgia to a past time,” the director revealed.

Benzing added that she and Watts “talked before I started sending concept art to the artists. I told them that I imagined light streaming through the windows, and then people could start to feel the dust particles around them. I think you have to be that clear in VR, because you’re building the world from scratch, and the world is three dimensional.

“So Reggie really loved the grittiness of the record shop, and how it would feel nostalgic. He has a strong affinity for the ’80s and ’90s. There are also elements of that in the music that he and John wrote,” the filmmaker revealed. She added that she thinks the title song that Watts and Tejada created is “amazing, and people can dance to it forever.”

The experience of being able to bring ‘Runnin’ on the festival circuit “is the best part,” Benzing also admitted. “When you tinker away in a room with engineers, everyone knows the project inside out. We, on the crew, love the project, but we already know it. So my intention was that the player would feel joy at the end of the experience. So to watch people lift the headset off, and see the smile on their face, is the best part of the dream.” 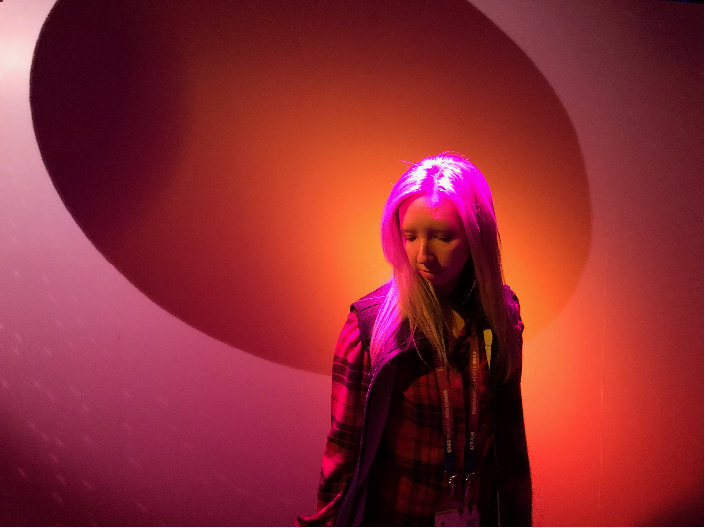