Directed By: George A. Romero

Written By: George A. Romero
Score: Technical: 75, Story: 80, Acting: 75, Overall Score: 77%
Â Â Â Â Â Â Â Â Â Â Â  Â A traveling group of modern day knights who have traded in their horses for motorcycles travel the country side looking for work setting up shop in any town they can find work.Â  The jousters and performers are ever so slowly beginning to give in under the pressure of the no-eyed hick town police, the financial difficulties and the inability to live up to the legends that they have created for themselves.Â  The leader King Billy is having trouble controlling the eagerness of the Black Knight and his urges for control over the traveling kingdom.Â  While battling for control the Black Knight is tempted away to Los Angeles to fame and stardom, as everyone must find their own way to work thru the reasons why they are here in the first place.

Â Â Â Â Â Â Â Â Â Â Â  A Roger Moore Two Skipped Beats dost thou film of Knighthood and motorcycle mayhem receive.Â  This film is not the best on the acting or one of George Romeroâ€™s greatest achievements but it definitely was a damn good time.Â  In the early work of Romero he experimented a lot with different ideas and this can truly be seen by anyone who watches his early films, and Knightriders is no exception itâ€™s a classic story with a modern twist on it, as it is dated which Iâ€™ve said before with time all movies are, this one is a classic of Romeroâ€™s and it doesnâ€™t have one walking dead person in it either.Â  A happy additive to any collection. 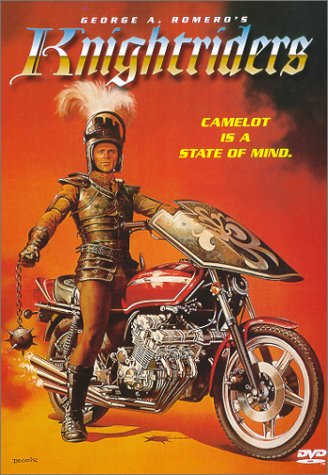