People from all different walks of life: an ex-cop turned limo driver escorting a movie star, two parents with a young son, a cop transporting a convict, a prostitute, a young couple, and a motel manager they are all mysteriously brought together and strangely enough share the same birthday.  They are caught during a terrible rainstorm, stuck at a shady motel in nowhere Nevada. Soon they realize they may be at the motel for another reason when one by one, people start getting killed off. As tensions flare and fingers are pointed, they have to get to the bottom of why they’re there. Meanwhile in an undisclosed location, a psychiatrist is trying to prove the innocence of a man accused of murder in an eleventh hour trial. How these two through-lines are related can only be found in Identity of all those who reside at the motel and only time will tell if the man on trial will have his life sparred or will he have one last sit in the chair that will take his life.

Receiving a whopping Three Skipped Beats on the Roger Moore scale of movies, Identity will keep you guessing until the very end.  As I have never really been a fan of James Mangold, Identity drew me in and left me wanting another film from this cinema genius and we get that with his next film the award winning “Walk the Line”.  I was very excited to watch Identity and couldn’t wait to watch it again once it was over.  All the acting was done very well and it gave us a look at how multitalented John Cusack can really be, I for one enjoy the hell out of this movie and hope you do too.  So if you haven’t seen it pick up a copy today, not just rent it pick it up you won’t be sorry for doing so. 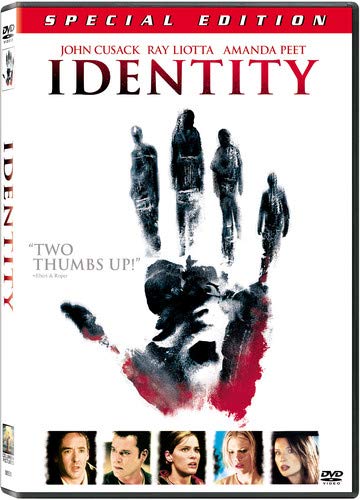