Avatar Press is returning to the horror genre they love, and will publish the first licensed comic based on Tim Sullivan’s 2001 Maniacs. 2001 MANIACS SPECIAL #1 is fully-authorized by horror icon Robert Englund, and the comic features his likeness from the movie as Mayor Buckman. 2001 MANIACS SPECIAL #1 is written by the 2001 Writer/Director Tim Sullivan, and it will be completely in-continuity with the original, second, and third movies. Spanish sensation Raulo Caceres will draw the comic, and it will be featured at the San Diego Comic Con supported by both cast and crew.

PRODUCT DESCRIPTION: Robert Englund stars in this origin tale of the 2001 Maniacs written by director Tim Sullivan! Just in time for the second film in this horror franchise, and written by the director and writer of the 2001 Maniacs movies, this Special fits into the continuity of the films. Tim Sullivan tells, for the first time, the origin of the 2001 Maniacs, and introduces two new characters that will be featured in the second film, coming out this Fall! Fully-authorized and with his blessing, Englundâ€™s likeness is used on his character Mayor Buckman in this gruesome tale of betrayal. This comic will be promoted with a special â€œmaking ofâ€ featurette on the DVD release of the second 2001 Maniacs film. No one but Avatar could bring this gory tale of tragedy to the comic page with the bleeding-edge story-telling the fans demand! This horrific issue is available with the standard, Wraparound, and Gore covers by artist Raulo Caceres, a Photo cover of Robert Englund as Mayor Buckman, and a special Englund signed edition that features a poster signed by Robert Englund, Tim Sullivan, and other members of the 2001 Maniacs cast and is limited to just 750 copies (ships with a certificate of authenticity). 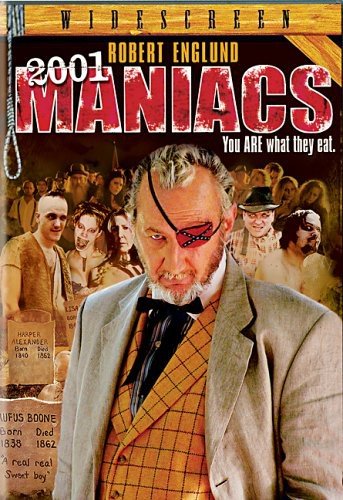