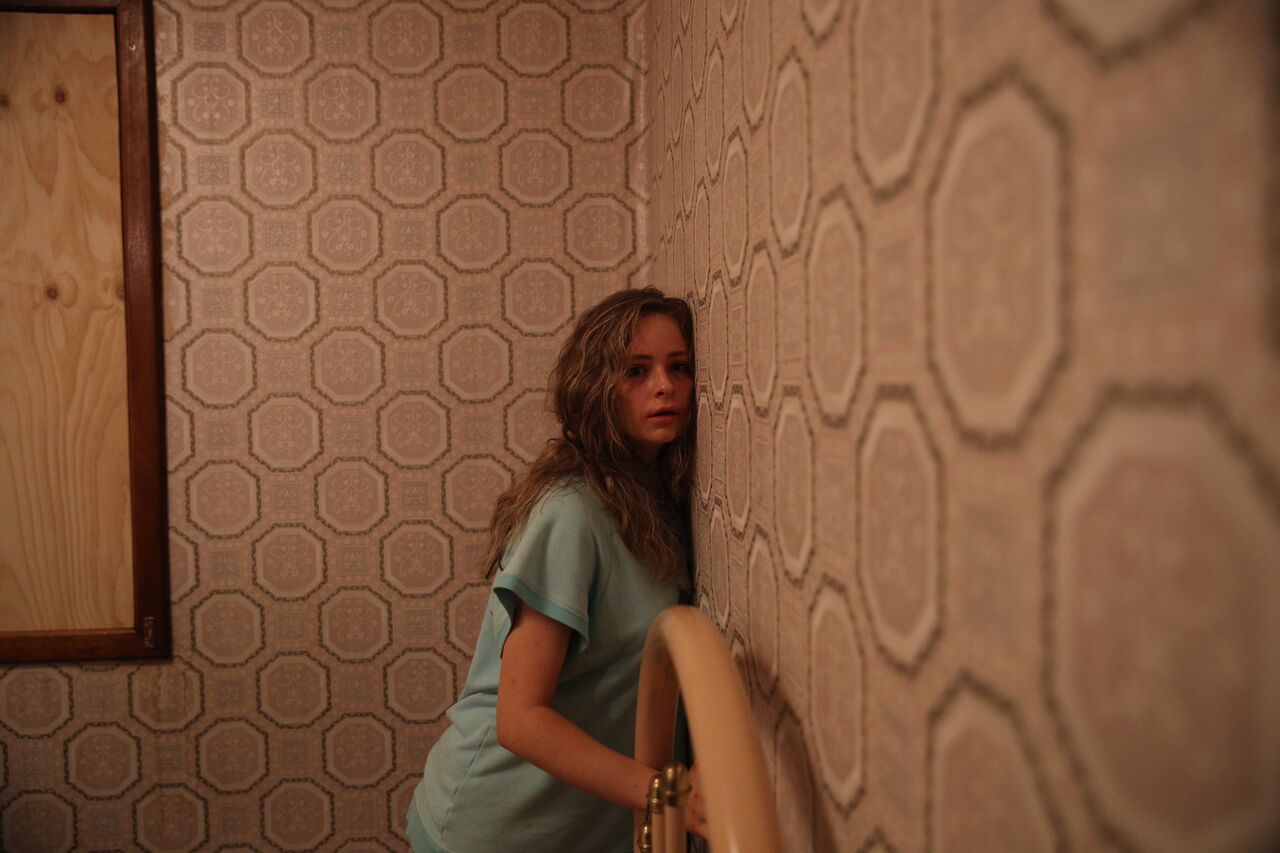 Truly understanding the psychology behind co-dependent relationships, and what drives a person to remain committed to someone who offers them nothing but oppression, is a form of intelligence that not many people possess. But the heroic protagonist in the new thriller, ‘Hounds of Love,’ who’s powerfully portrayed by up-and-coming Australian actress, Ashleigh Cummings, is stunningly perceptive of the psychology of the people who feel the need to remain in these destructive kinds of relationships.

Gunpowder & Sky is set to release the emotionally powerful ‘Hounds of Love,’ which marks the feature film writing and directorial debuts of Ben Young, in theaters and on VOD tomorrow. The American distribution comes after the acclaimed crime drama was granted such accolades as Best Actress for Cummings at the Venice Film Festival; Best Director for Young and Best Actress for Emma Booth at the Brussels International Film Festival; the Grand Jury Prize and Audience Award for Best Feature at the inaugural Overlook Film Festival; and Best Feature Runner-Up at the Boston Underground Film Festival. The movie also had its New York premiere during the Midnight section of last month’s Tribeca Film Festival.

‘Hounds of Love,’ which is set in suburban Perth during the mid 1980s, follows a married couple, John and Evelyn White (Stephen Curry and Booth), who sadistically prey on young women. Initially, the spouses’ neighbors are unaware that the perpetrators ultimately bring their victims back to their shabbily nondescript suburban house. However, that ignorance is dismantled when the rebellious 17-year-old Vicki Maloney (Cummings) begins to express her resentment towards her mother, Maggie (Susie Porter), over Maggie’s decision to leave Vicki’s father, Trevor (Damian De Montemas).

Desperate to prove how upset she is with her mother, Vicki sneaks out of their house one night, so that she can attend a party. However, the teen’s fortune soon runs out, as she’s targeted by the Whites while she’s walking to the party. The couple offers Vicki a ride, which she readily accepts. But instead of dropping her off at the party, John and Evelyn bring their latest target back to their home.

While Vicki becomes immediately distraught over her sudden bad fortune, Evelyn also becomes distressed when she notices that her husband begins to form an unusual interest in their new victim. Evelyn becomes upset that John is drawn to another woman, especially one who is so young, especially since Evelyn previously decided to have her children from a previous relationship removed from their house. Evelyn has long regretted her decision to give up her children, even though she felt that the only way she could save her relationship was to not have children of their own in the house.

Vicki soon starts to recognize the growing tension between the Whites, as she became attuned to growing tensions in a marriage while she watched her parents’ love deteriorated. With John continuously giving in to his own selfish desires, Vicki realizes that she can take advantage of the situation, particularly through persuading Evelyn of John’s deceit. While Vicki takes whatever means necessary to break the bond between the Whites in order to aid in her escape, her boyfriend, Jason (Harrison Gilbertson), and Maggie team up to tirelessly search for Vicki, no matter what obstacles they’re forced to overcome in the process.

Cummings generously took the time to talk about starring in ‘Hounds of Love’ during an exclusive phone interview the day after the horror movie had its North American premiere during the Narrative Spotlight section of this year’s SXSW. Among other things, the actress discussed how she was initially not only drawn to the fact that Young mainly told the story through the female perspectives of Vicki and Evelyn, but also the emotional strength that her protagonist held onto throughout her ordeal. Cummings also mentioned how she appreciated how collaborative the writer-director was with not only the actors as they brought their characters to life, but also with the entire crew, especially since the drama was shot independently.

The conversation began with Cummings discussing what convinced her to take on the role of Vicki in ‘Hounds of Love.’ “What interested me was the female perspective that Ben created. You don’t often see those stories told, especially from the perspective of the Evelyn character. So the whole project interested me on that level,” the actress revealed.

“In terms of my character, I was really intrigued by (Vicki’s) strength and spirit, as well as the normal rebellion that occurs during adolescence.” Cummings added that seeing how that rebellion “affected (Vicki) was extraordinary, especially in her experience with John and Evelyn, as well as her relationship with her mom. These three women lead parallel journeys, in many ways. They all informed each other’s experiences. So that was my main interest in the script.”

The performer then shared that she then met with Young, “because I still wasn’t sure how he might articulate the events in the story. I read the script, but there are so many different ways in which you can shoot this kind of material. One of the first things he said was that he wanted to hide the humans; that was his first priority. Then he wanted to look at their skill credits. So that hooked me in, and was one of my favorite things about him. Ben has an incredible heart, and I think that shows on screen.”

Cummings also appreciated that the filmmaker “wasn’t interested in the violence, and that’s not what the story’s about. It’s not about showcasing the horror or blood; the story’s about the psychological journey they go through. So much of the horrors of the experience is implied and not shown, which is something that I believe in. I feel the story is much more important than the actual incidents.”

Further speaking of her collaboration with Young on ‘Hounds of Love,’ the actress admitted that he’s “one of the most phenomenal directors I have ever worked with. His generosity of spirit, as well as his energy, devotion and knowledge of the material and characters, was amazing. He also gave us space to breathe and own the characters ourselves. That balance he had was extraordinary.” Cummings appreciated that she “could ask him anything, and he’d not only have an answer for me, but would also have a question for me. He let me create my own Vicki, and would say, ‘This is your character now.'”

The performer also divulged that she “had 20 million questions. Whenever I also had an idea, Ben would go through it. Despite his schedule, he was so generous with his answers, and exploring Vicki with me. That was just during pre-production! Then on set, he was not only an actor’s director, but also an everyone’s director. He was so aware of all the different departments’ needs, and what he wanted from all of them. But he would still give everyone the flexibility to own their roles.”

During that process, Young “would give us multiple takes, so that we could explore different choices. That’s a very rare occurrence for an actor. Usually when you get a take, if it’s technically okay, you move on, especially on a project with a low budget, because you don’t have that much time,” Cummings explained.

“But Ben was very committed to our performances, as well as to us as humans. He would often support us, and he was so gentle with me, because it’s such a heavy subject matter. He was constantly checking in to see if I was okay. He never wanted me to do something that I wasn’t comfortable with,” the actress further noted. “So his awareness of me and other people as humans and artists, is extraordinary.”

Vicki is a strong-willed protagonist, who’s willing to do whatever it takes to protect herself, and escape, from her captors. So Cummings then described her process of relating to, and understanding, her character’s mindset, and the journey she embarks on throughout the story. “I was very aware that in the acute stages of her kidnapping, as her emotions were very high stake. But I didn’t want those high stakes emotions to be monotonous throughout the whole film. So we really tried to map out a journey for her…I had different images and music to stimulate the emotions that I was going through at any given point,” the performer shared.

Cummingss also added that “it was really important that there was differentiation between the scenes, because she had progressed in her journey. At one point she was angry, and at another point, there was desperation and despair. So there was a conscious effort that Ben and I made.”

Since Vicki is struggling to escape from John and Evelyn’s imprisonment throughout the majority of ‘Hounds of Love,’ the actress also described the process of creating the physicality for her character throughout the story. During her preparation for her portrayal, Cummings gathered research to understand how Vicki would react after she was given drugs by John and Evelyn, as her body’s response would inform her body’s movements and physical pain. “I also kept track of where in her body she was hurt” by the couple, the performer added. It was important to Cummings to “know the physical and emotional sensations (Vicki) was going through…That was a very conscious journey.

“I always find it to be very hard to do any kind of drugged scene, as it can look so fake so easily,” Cummings admitted. “But everyone was extraordinary in helping me and guiding me in figuring out what looked real.”

The Australian actress also discussed the experience of attending ‘Hounds of Love’s North American premiere at SXSW. “It’s been so exciting. I wish I could (have stayed) in Austin for longer, as I’ve never been to Texas before. The people (there) are so enthusiastic. I went to our premiere screening of the film…and we had this beautiful festival experience, and I feel so fortunate about it. I stayed to watch two other films after our screening, and people were still approaching me at 10 o’clock at night to tell me how much appreciated our film and performances,” Cummings revealed.

The performer added that it was special that the thriller received such positive recognition, since “we worked so hard on it on the other side of the world. It really warmed our hearts that we were able to share these powerful messages with people globally,” Cummings emotionally revealed.