Album: ‘The Lost Art of Empathy’ 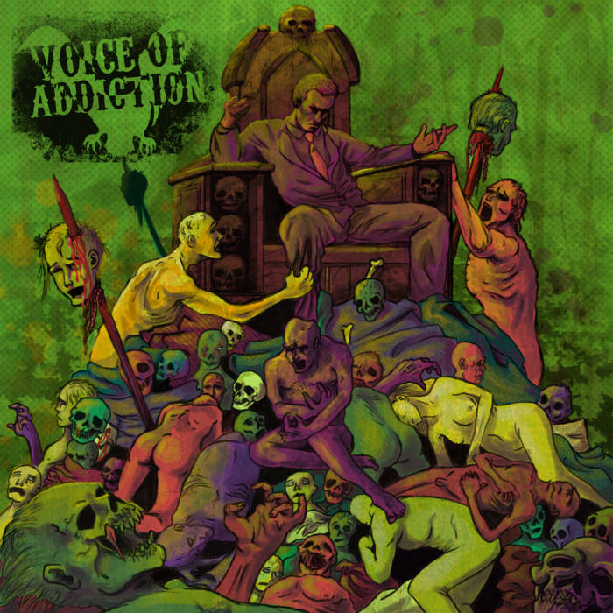 The album cover for Voice of Addiction’s ‘The Lost Art of Empathy.’

Every generation breeds fearless idealists who aren’t afraid to question the current status quo, and challenge the mounting social and political frustrations that many working-class citizens are experiencing in their lives. Such bold visionaries make up the politically charged and socially conscious rock-punk band, Voice of Addiction.

The Chicago-based group has recently released its latest album, ‘The Lost Art of Empathy,’ which ponders the problems that are currently plaguing American society. The musicians, who are led by the band’s founder and singer, Ian “Johnny X” Tomele, share the familiar sense of being overwhelmed by the nonstop social injustices that surround society on a daily basis.

‘The Lost Art of Empathy’ begins with the dominant entry, ‘Rustbelt,’ which effortlessly showcases how at ease Voice of Addiction’s members are at combining unique, infectious and quick-paced punk and rock baselines and drum beats. Tomele’s gruff vocals emotionally chronicle his ode to his hometown of Cleveland, whose environment helped influence the person he is today. The song captivatingly chronicles people’s struggle to survive in the title Rustbelt, where the singer claims that no one protect the local workers, who can’t escape their difficult living conditions. He also notes how people are wandering without a sense of home and belonging, which he hopes to change.

Voice of Addiction’s latest record then transitions into its sophomore punk-rock track, ‘Dead By Dawn,’ which features even an even more vulnerable tone. Tomele passionately points out that people are always experiencing something new that redefines them. But with the help of the intense guitar riffs, the tune perfectly highlight the musicians’ stance that all citizens must support each other in order to survive, no matter what situations they’re currently living through.

The next entry on ‘The Lost Art of Empathy’ is the defiant ‘Unity,’ as Tomele once again reminds the leaders who want to oppress society that he and his bandmates won’t be held down. The quick and energetic punk song is a powerful declaration that no one’s a pawn of society, and if people bond together, culture can improve.

‘Unity’ then paves the way for the melodic punk track, ‘Petty Schemes,’ which highlights the desire to leave petty politics behind. Voice of Addiction triumphs in it declaration that it won’t subscribe to modern democracy, in which corrupt politicians and leaders are only acting in their best interest. Tomele powerfully declares everyone’s interests need to be considered.

The next tune on ‘The Lost Art of Empathy’ is the unique ‘Corporate Pariah,’ which interestingly combines soul with ska-punk vibes. Initially set against only a subdued guitar, Tomele’s vocals are finally highlighted in their natural ability on one of the album’s most creative entries. In a mix of rock-and-roll, punk and rock, Voice of Addiction points out that society has created a false messiah, which has led many people to not have sympathy towards other people.

The Midwest musicians then delve into the punk-inspired song, ‘Lockwood,’ which reminds listeners that they should always embrace their own individual furor. The nostalgic track, which is dedicated to the memory of one of the band’s fans, is a fitting homage to anyone who helps to keep the punk and rock genres alive.

Voice of Addiction’s latest album then transitions into the punk-fueled tune, ‘I Can’t Breathe.’ The band members highlight the fact that leaders are continuously pretending that they’re protecting those people they’ve sworn to serve. The entry, which features The Offspring-inspired vocals and instrumentals, points out that while some people have means to save themselves, but not everyone has that ability, so politicians should help protect those in need.

The next song on ‘The Lost Art of Empathy’ is the visceral, punk-rock-fuled ‘Everything Must Go,’ which is inspired by such groups as The Sex Pistols and The Ramones. Voice of Addiciton’s gruff lyrics point out that modern society is destroying the future for the young, and is further dividing the country over citizens’ diverse views on politics.

Voice of Addiction presented its best track, ‘Are We Even Human Anymore,’ in the last slot on ‘The Lost Art of Empathy.’ The brilliant acoustic guitar perfectly highlight the more vulnerable and pop-infused nature of Tomele’s vocals. The more stripped-down nature of Tomele’s voice on the tune not only allows the singer to truly express his most vulnerable thoughts and emotions, it also creates the most commercial and relatable entry on the band’s new album. Tomele emotionally relays how his experiences with everyone he meets during his travels and every day interactions have left some of the biggest influences on him.

Every generation breeds courageous idealists who aren’t afraid to question the current status quo, and challenge the mounting social and political frustrations that many working-class citizens are experiencing in their lives. Such bold visionaries make up Voice of Addiction and inspire its latest record. ‘The Lost Art of Empathy’ highlight the familiar sense of being overwhelmed by the nonstop social injustices that surround society on a daily basis.