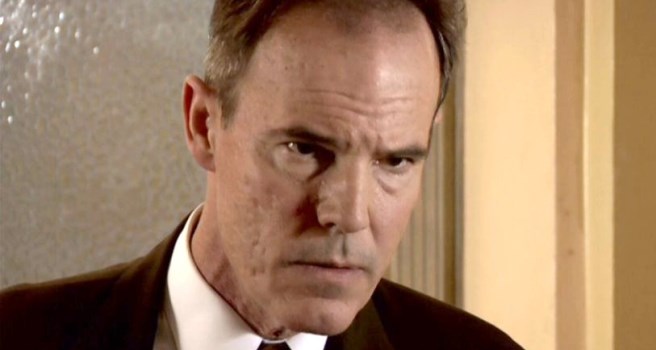 Mr. Divoff you’ve actually have been in 60 some odd movies, but a lot of people know you from your Wishmaster movies, would you like to talk a little bit about some of your other movies you’ve done?

Yea as a matter of fact, I just went over 51 on the IMDB. I know there’s probably a few things missing there. But sometimes people ask, you know, if I had to give them one film which one would I tell them to watch, and I can’t do that, so I usually say there are three of my favorites; one of course which is “Another 48 hours”, the other is of course “Wishmaster”, and then there’s one called “Deadly Voyage”. It’s pretty hard to find and it was a movie that we filmed over in Africa about a true story. Basically, it’s kind of called, “Die Hard on a ship”. It’s about these stowaways who were one by one hunted down on the ship and simarly thrown into the Atlantic. I played a guy named Roma Shanko. And he’s the guy that when they finally arrested the gentlemen who was responsible for all this, he was the one who took the police around for the forensic explanation of what happened where.

I guess that’s about it, “Another 48 hours, “Wishmaster”, and this film called, “Deadly Voyage” are ones that, you know, I’d say, if you wanted to know a little more about my career, check those out.

You know actually one of the movies that I usually I don’t hear mentioned when your name is brought up, but is actually one of my all time favorites is “Running Cool”, now in that film Mr. Divoff, you play a biker . Do you actually ride now a days?

Yea, you know I, I started riding for “Another 48 hours”. As a matter of fact, when I went in to do my interview for that, I remember the casting director asking me if I rode a Chopper. She didn’t quite understand that the Harley World and the fact that a Chopper is a different thing from what you might ride everyday.

But there’s a place called “Bartells”, and thank god for those guys, there was a guy who sort of put me on a bike. I trained and I got to keep that bike for 6 months. Then the bike that I got in “Another 48 hours”, myself and David Anthony Marshall ended up buying them. I actually ended up having that bike for a while. The guy who wrangled the bikes took them to another show stone cold with Boz, and that same guy, the wrangler, stole the bikes from that show. And so we were kinda out in the cold. But yea, Long story short, I do ride.

“Running Cool” was a good movie. You know, it showed the other side, everybody sort of said “Another 48 hours” was the so-called 1 percenter of the bikers, and that’s how they are. And then you know, really I mean, I would say most of them are like Bone in “Running Cool”, who, you know, went out of their way – this was kind of about doing a run to save the wetlands, and you can see that he had a heart. It’s funny you bring that up, I really haven’t heard that a whole lot.

One of the other characters that you play quite a bit in your movies are actually Russian inpiduals, now I’ve noticed that you also speak and write fluently eight different languages, and that’s absolutely amazing. Can you name off some of those languages you speak and how they’ve actually helped out your acting career?

Absolutely, it’s funny you said nine. I actually spoke nine. My ninth language was Romanian. And I did a movie in Romania, I knew I was going to be over there so I started studying with the books, you know, got the phrase books out. So by the time I was there for some two and half months, I left and I was doing my interviews in Romanian. But I must say, because of the fact that I had nobody sorta to speak with, (and I never sort of believed that this would happen), but I actually forgot. I literally forgot it! So it’s now eight. Some of those include, French, Spanish, Italian, Portuguese, Catalan (I lived in Barcelona for a while so I learned that language). Then of course Russian. As you say, I have played quite a few Russian characters – and as a matter of fact, my first role was “Screaming Russian Guard” for a show called “Blacks Magic” which was a short/large show that starred Hale Lyndon and Harry Morgan. They were a father son team, he was a magician/private eye. So that was the first time I got to go on there, and I think I was screaming, “STOP THAT TRUCK”. And it sort of snow balled from there.I do play accented characters – a lot of those, a lot of characters that speak other languages. I’ve even had the great opportunity to learn languages phonetically in order to use them- those include Arabic and Chinese. So any time I can get a challenge like that, I love it.

Now what movies are we going to see you in the future here? I know you have a couple in the works? One’s “The Rage” and actually you’ve been in three different movies that have “rage” in the title.

You know, what they’re already doing; to sort of educate themselves on whatever genre may be their favorite. One thing I’ll say, the horror fans tend to be the most knowledgeable fans when it comes to film in general, I found that.

I know there was “Dr. Rage”, “The Rage”, and then the third one you got me on. What’s the other one?

:: MOMENT OF SILENCE:: Go to IMBD! Check out Andrew Divoff on there! Trust me, I am not lying! You know my teenage years have been bad on my memory, so I’ll just blame that, right now.

The next one coming out is Robert Kurtzman’s first film since Wishmaster. And I’m looking forward to that. I guess it’s going to be promo-ed at Fango in Chicago. I know he’s invited out there for that. So I’m looking forward to that. I haven’t seen any of the footage but I know that Robert’s very happy with it and anything that I can do to help him get that word out.

But I’m doing a lot of episodics. I’ve done a couple – I won’t mention the names. They haven’t replaced the shows that they were suppose to replace and frankly I don’t know if that’s going to happen, if they will. But I’m just back from a show that we did, an autograph show, over in Europe, in a place called Minster Germany. That was quite fun. It’s always good to sort of travel and be living in essentially another point of view.

Do you have any advice for up and coming actors/filmmakers out there?

My suggestions to young actors would, do your due diligence. Go get into a class, usually you start with a cold reading class just to be used to reading off a page, looking up and making eye contact with whom ever is reading with you which will probably be a casting director. And Film makers/directors – boy, I’d be the wrong guy to ask for advice there, other then to say, just be diligent. Young actors – I would tell them keep their ears and eyes open and keep their opinions to a minimum until they really feel like their in their own skin in this world.

And frankly I wish there were more art councils in the states that would support this American art, which is filmmaking. It seems to be sort of blowing everywhere in the wind these days, leaving the states, and after all it is a very American iconic thing; I mean filmmaking, it is American legend telling. It would be nice if we could support with endowments, with grants, whatever, pp and coming artists. We need more artists, we’ve got enough business men. Enough corporate dudes, and more art.

Mr. Divoff, is there anything else you’d like to say to all your fans out there?

Just say one thing, thank you. Thanks for the support. Thanks for making me keep finding this a magic thing to do. I do love doing these shows. I love the contact with the fans – just to be able to answer questions that usually don’t get answered through the magazines or though other venues. But, thank you for your time, and again, thanks to the fans.