When a group of saloon prostitutes gather together to save a friend all hell breaks loose for these women who are no wanted by the law and everyone else.Â  Trying to start a new life in Oregon, which seems to be the best thing to do they run into problems when their past comes back to haunt them in a bad way.Â  The only thing left for them to do is to become the Bad Girls that they are.Â

Jonathan Kaplan has delivered a very good western with this movie, and having the cast mostly all women makes it that much better especially with the attractiveness of the cast.Â  Other than that there was nothing to spectacular about this movie even with a great cast it was a good movie but it lacked in the violence side of things it could have been more.Â

Receiving Two Skipped Beats on the Roger Moore movie scale I am proud to have this flick in my collection.Â  I would recommend it for anyone who is a western movie fan or to anyone who likes to see Drew Barrymore strut her stuff half naked.Â 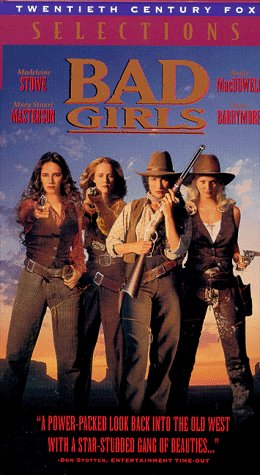