Part one in Danish film director Lars von Trier’s “USA – Land of Opportunities” film trilogy, often controversial and to some, offensive statements on America and its society. The second part was Manderlay, released in 2005, dealing with slavery in America, and the third part is Wasington, inevitably dealing with American politics, to be released possibly in 2007 (Though there have been delays).

Trier has been criticized heavily for this trilogy, some saying the films using the sparse Dogme95 style are boring and long (the sets are all just stages. The houses are drawn in chalk-line boxes. The only real things are the cars and people. I’ll discuss this further later), and some (particularly Roger Ebert) criticizing him for his statements on America since he hasn’t even visited the country at all.

And I suppose that criticism may be valid, but, I:
1.) Hate Roger Ebert.
2.) Think these films were brilliant.

Besides, since when havenâ€™t American filmmakers made presumptive films concerning parts of the world theyâ€™re not really familiar with?
Let’s begin on Dogville, a story of the monster lurking behind the classic image of the American small town. The story is about a woman named Grace (played brilliantly and tragically by Nicole Kidman) on the run from a mob boss who takes refuge in a small town named Dogville. The townspeople welcome her…but soon Dogville bares its teeth and her safekeeping begins to cost a price. Her own secrets soon come to light as well…
I don’t want to ruin the plot, but let me say that the film is brilliantly acted and directed. As for the sparse style, after a while, one gets used to it, and it’s often used for disturbing purposes. The actors act as if they’re in houses, but they’re simply just chalk lines. So for example, the viewer watches rape going on “right in front” of the townspeople, though obviously they can’t see it because of the “walls”.

It is however, quite long and some say (I had no problem with it, but don’t take that as reassurance, I’ve lasted through the most tedious films ever in existence…I have good film stamina. I’ve seen The Brown Bunny and survived!) even tedious at 178 minutes, but you know what? I highly recommend it. I just love this film, it’s so tragic and horrific and well-made and clever.

And let me say, the ending is the most viscerally satisfying finish I have ever had the pleasure of enjoying on a film screen. Utterly violent and destructive yet totally satisfying on an emotional animalistic level.

Definitely worth a rental, though it may not be appropriate for everyone as it can be extremely long and the sparse film style totally devoid of action may bore many. 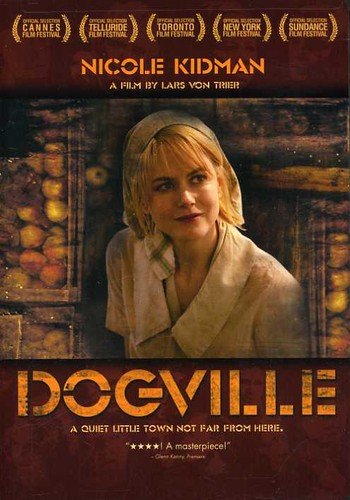