Do you remember the 80’s? You know when Horror movies kicked ass. I miss those days. Sure there are some really great horror films these days but there are also plenty of crappy ones like When the Stranger Calls remake. On May 30 th, 2006, Cemetery Gates was released on DVD. How was it? Well, Cemetery Gates is a welcomed return to those gory days of the 80’s.During its 90 minutes, Cemetery Gates is a non-stop ride of Blood, guts and Tits. Yes, there is some character development here and there, but who cares about that shit when you should be having a blast watching a Tasmanian devil tear apart several victims, including KNB bad boys Howard Berger and Greg Nicotero.

The acting is pretty good all around. Reggie Bannister plays a more clam version of his Phantasm character but he’s pretty good in his role here. The other actors are unknowns (well to me they are) but do well at what they’re doing. Kristin Novak is hot as hell, though.

You want gore? Lots of it? Cemetery Gates delivers. This has to be the goriest movie I’ve seen in a long time. People are ripped to pieces, heads are smashed, limps fly around and the red slush is thrown around like it’s nobody’s business. You won’t be disappointed.

Roy Knyum’s background in Make-up FX helped him with directing duties here. The direction is solid, the pace is fast and the movie is never boring. Plus having an FX guy behind the camera is always good in terms of gore and creature effects.

Speaking of the creature itself, the Tasmanian devil (called Precious in the movie) no CGI bullshit here, this a man in the suit, just like the 80’s (cries a little). To tell you the truth, I don’t remember seeing any CGI in this movie at all. The man in the suit creature looks pretty good and works well in the movie. I really liked it.

The music is pretty good. Can’t say much on this part.

Cemetery Gates is the perfect weekend rental. It’s funny (the part with Nicotero and Precious is hilarious) It’s non stop gory and it never gets boring. It feels like it came from the 80’s. I want to see more films like this. Highly recommended. 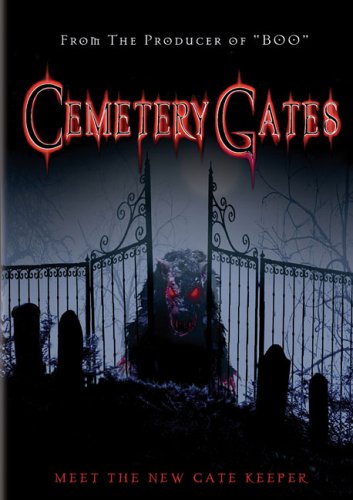