Boy oh boy, films-full-of-thrilling-twists-and-“Made you look!”-turns are getting popular these days. Because eXistenZ is full of such mystery and surprise endings, existence and reality itself being questioned!

This is an entertaining sci-fi thriller by the always creative and kooky David Cronenberg (A History of Violence, Spider, The Dead Zone, and more).
The plot is interesting and delivered rather well, though the special effects aren’t anything ground-breaking, they still look alright for 1999. The basic story is basically, Allegra Geller (Played by Jennifer Jason Leigh) makes a game in the future (quite an amazing virtual reality game dubbed “eXistenZ”) where the very game taps into the minds of the players, delivering them into a virtual world of madness, and the film begins with her presenting it to a focus/testing group. Among them is Jude Law’s character, and a number of people possibly looking to kill Geller. They hook into the game, shit happens, and the line between reality blurs over and over with twists and turns.

It may receive The Matrix-comparisons, but like many films that receive The Matrix comparisons, such as Equilibrium, they’re quite unfounded. The ideas of the Wachowski were hardly completely original, and eXistenZ came out before The Matrix, actually.
In fact I shouldn’t even have mentioned The Matrix, eXistenZ is utterly different and one shouldn’t been thinking of The Matrix while contemplating eXistenZ. Heheh. Frankly it was an entertaining film with nice performances by Leigh, Law, Ian Holm, Willem Dafoe, and more…

The movie just takes many twists and turns that I certainly won’t get into since I don’t want to give anything away.

Let’s just say it’s quite an entertaining film with an ending that’ll leave you scratching your chin and smiling.

While it has its flaws, it’s certainly an entertaining film and I recommend giving it a quick rent. Delivers great twists and turns. Definitely a wild Cronenberg flick. 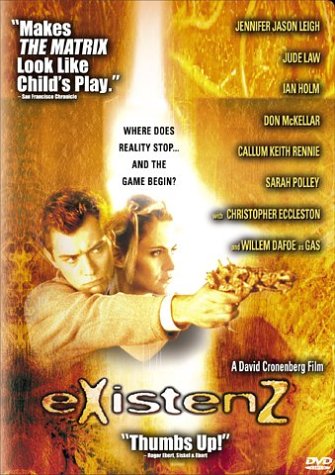