You know what? Forget American gangster movies. Forget Mafia movies.
Damn right there’ve been a lot of great American gangster films (Miller’s Crossing, The Godfather, etc.), but I just adore this English gangster movie called Gangster No. 1. It’s more intense, psychotic, and violent than any of these classics, and I found it more of an interesting and disturbing character study.

No, it’s not those English gangster caper movies like Snatch or anything, it’s brutal, psychotic, and the narrator is frankly a crazy bastard.

The plot is too complex to go into now, Malcolm McDowell plays an Old Gangster and Paul Bettany plays a Young Gangster. I mean they’re both the same character, it flashes back to like the 70s from the current times, the chronicles of a ruthless insane gangster who joins the charismatic gang leader and lady’s man Freddie Mays. First as a grunt, then as a slowly exceedingly violent and obsessed madman who wishes to become Freddie Mays, to become Gangster No. 1

His methods and actions are chillingly violent, especially with his most famous kill, traveling into the apartment of a gang leader he wishes to exact revenge on. As he walks towards the room you heard McDowell’s maddening and slowling growing faster and faster inner monologue. “I’m Superman! King fucking Kong! I can pick you up and throw you a million miles. I’m number one. Number fucking one. I’m number one. Number fucking one. Number one! Number one! NUMBER ONE!!!”

The Gangster takes his time, shooting the man in the leg, then taking off his fine suit so he doesn’t stain it. Then you see from the gang leader’s point of view as he slowly tortures and brutally and maddeningly releases his violent rage upon us, the viewer.
Both Bettany and especially McDowell play the Gangster splendidly, especially Malcolm’s even more psychotic demonic older version, now comfortable in his position as Gangster No. 1 after butchering his way to the top.

The flashbacks and plot are generally coordinated pretty well, and McDowell’s narration never fails, just meshing splendidly with his younger self, Paul Bettany’s equally psychotic actions.Â It’s all splendidly directed and well-acted, all the way to the final dark and satisfying conclusion on McDowell’s part after reaching the supposed top yet still feeling empty, Freddie Mays still having the last laugh.Â Really loved this film. Fan of gangster movies or English cinema? Rent this now, it’s really a great film, though the insanity, brutality, and sheer violence could be overwhelming to some. Great film. 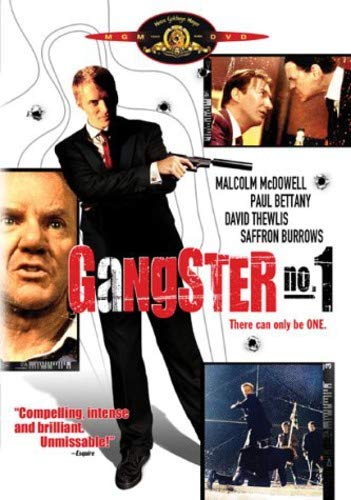