Two feature length films placed together in old Grindhouse fashion. Fully loaded and equipped with fake movie trailers in between each film.

Cherry a newly retired GO-GO dancer is on her way out as her old flame Wray is on his way back in, to her life that is. Also following the story of Dr. Brock and her husband along with their child in tow. But these stories collide when the world becomes over ran with a strange form of new bio-zombie.

Stunt Man Mike is just that a stunt man and a damn good one at that especially since his car is supposedly 100% Death Proof. Mike hits the road with one thing on his mind and that is death, out to kill those he stalks and follows for some time before doing them in, he preys on his victims and uses his car to do the deed.

Terror Planet was filmed with a style all its own, crying out that it is a straight up Rodriguez flick it was gory, violent and sexy all the same. The filming was done in the classic Grindhouse style, filmed on an HD camera by Rodriguez and given that aged look and feel to it as to make it more Grindhouse. Rose McGowan brings sexy to a one-legged stripper with a machine gun for a leg, and Freddy Rodriguez as the fighting and powerful El Wray who is fighting to save the day.

Death Proof was filmed in that screaming Tarantino style. Bringing back to life the fast muscle cars of his youth, in a day when the imports rule the big screen. The badass women that filled the classic â€œVanishing Pointâ€ 70â€™s Challenger could not have been chosen any better and Kurt Russell bringing Stunt Man Mike to life was simply magnificent.

Three Skipped Beats on the Roger Moore movie scale these two were a nonstop thrill ride from beginning to end; both films were done in their own unique styles, with great fake trailers by some of the greatest up and coming directors out there. This movie is not doing that well at the box office but it is guaranteed to be an instant cult smash, and the DVD sales and rentals on this one are gonna go through the roof. With the right amount of gore and violence and sex to them both of these movies, they have been given the right stuff by both of these directors. 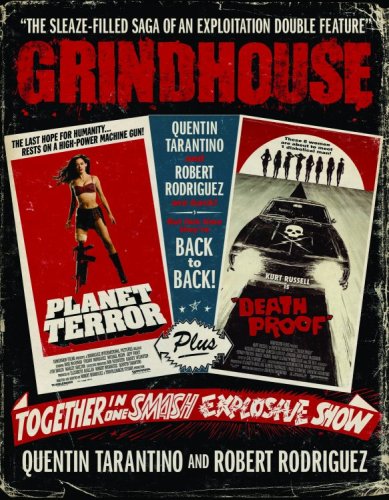