Bringing Out the Dead- Movie Review

48 hours in the life of burnt out paramedic Frank who is working the Hellâ€™s Kitchen route in Manhattan. Frank has a small problem, he is seeing the ghosts of those he failed to save. Frank tries everything he can to get fired, but finds himself unable to simply quit his job. What is it that Frank will have to face on this fateful night that will change his life forever?

Scorsese delivers big with this fly by night suspense filled thriller, filmed entirely with his own style of wit and banter. The filming on this flick was excellently done with spectacular camera work everything from the fast paced action sequences to the slow dreary parts where everyone was strung out. Itâ€™s a film that stands out on itâ€™s own as one of Scorseseâ€™s better films .

Receiving Three Skipped Beats on the Roger Moore movie scale, Bringing out the Dead was a great film that really kept me entertained and wanting more even when it ended. Martin Scorsese did something special when he made this film, what it was I canâ€™t exactly say only that this film was a complete and total trip and it should be in everyoneâ€™s home movie collection I know itâ€™s in mine, is it in yours? 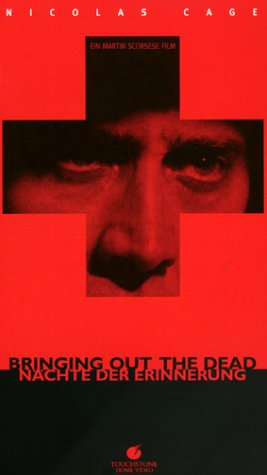