A young and up-and-coming actress in skimpy clothing, on a bed, in a cell. While this may have seemed like a good idea on paper to the executives at After Dark Films, in an effort to draw men into theaters to see the new horror movie Captivity, it didn’t translate well onto the screen. The movie, which stars Elisha Cuthbert, Daniel Gillies, and Pruitt Taylor Vince, is supposed to expose the insecurities and fears of all women, falls flat, as it only really exposes the different forms of torture that Hollywood can think of and create.

With the help of controversial promotional billboards in both Los Angeles and New York and the popularity of similarly-themed movies, Captivity seemed destined to become a financial success for its studio, After Dark Films. Since the studio is relatively unknown and there aren’t any big name actors in the movie, this controversy should have been a blessing in disguise, as a way to draw in crowds into theaters. The billboards in question showed pictures of the kidnapping, torture, and murder of one of the movieâ€™s female characters. After people filed complaints with After Dark, the studio claimed the billboards were only one of many advertising ideas, and wasn’t supposed to be approved to be shown to the general public.

The apparent plot, or lack-there-of, revolves around the capture of the main character, Jennifer Tree (played by Cuthbert), a New York fashion model and actress, from a charity event. Even though she was adored and loved by both the media and the American public, she was sitting alone, and went unrecognized, at the event. This gave her captor ample time to drug her drink and take her with getting caught.

Jennifer is then brought into an underground cell, where she is forced to watch videos of pervious victims who were tortured and killed. She’s also subjected to various forms of psychological and physical torture, during which she pleads with her captor to let her go. She eventually discovers that thereâ€™s also a man being held captive in the adjoining cell. The two try to figure out why theyâ€™re being held, and figure out a way to escape.

Captivity can easily be compared to Saw and Hostel, two similarly-themed horror series, in which people kidnap and hold strangers captive. In all of these movies, the captors also expose their victims to both emotional and physical torture, such as burning them with acid and pulling their teeth out with pliers. However, the Saw and Hostel series actually have plotlines and develop the characters, unlike Captivity, which just has scenes of torture, and no actual story behind it; director Roland Joffe didnâ€™t add any underlying messages or meanings.

The screenwriters and Joffe should have developed Jennifer’s character more before the kidnapping scene, in order to show what her life and personality were like, both socially and professionally. Then the audience could see and understand what her fears were, which her captor used to his advantage during the torture scenes. The audience would have been able to emotionally connect with her on a deeper level, and understand what she was going through, instead of thinking she was just a dumb, blond, spoiled model.

In After Dark’s synopsis of the movie, it claimed Jennifer’s captor had a twisted, sadistic mind, and he was jealous of the fact that she had many other fans who wanted her. However, this, and the reason why the captor took other victims hostage, wasn’t explained or evident in the movie. It also didn”t seem as though he treated her any differently from his other victims, as he videotaped, and made scrapbooks for, all of them.

Overall, Captivity did not live up to its promising expectations, even with the help of its controversial advertisements. As punishment from the controversy, the Motion Picture Association of America (MPAA) didn’t want to give the movie a rating, which is usually a guarantee that a movie won’t perform well at the box office. Ultimately, the MPAA decided it would wait until at least April 30 to rate it, which would make the original release date of May 18 impossible. With this delay, After Dark had the time to shoot more scenes and re-edit the movie in an effort to make it better; but in a likely effort to save the studio money, it released the movie on July 13 as is.

While there are many intense scenes that involve torture, violence, gore, and drugs, the main people who would most likely enjoy seeing Captivity in theaters are Elisha Curthbert fans, as she has the most screen time. For everyone else who enjoys watching horror-suspense-psychological thrillers, they should wait to see this one until it comes out on DVD in three months, and go rent Saw or Hostel now.

Click on the image to purchase your copy at Amazon.com 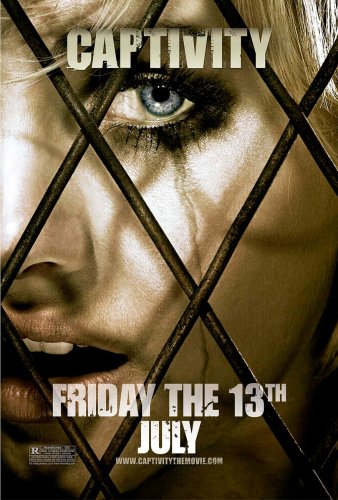