(Congers, NY, October 16, 2007) Wizard Entertainmentâ€™s Anime Insider 50th issue unveils tomorrow, with a one of a kind custom cover. The art, which was created exclusively for Anime Insiderâ€™s 50th issue, features Neon Genesis Evangelion leads Rei and Asuka. Additionally, Anime 50 covers the best anime of all time, announces a writing haiku contest and includes all the in-depth coverage readers have come to expect.

The cover, which features new art of Rei and Asuka from the classic and still-hot Evangelion series, was illustrated by Fumio Iida from GAINAX, the director behind anime hits Wings of Honneamise and Roujin Z. Rei is seen holding a celebratory cake and Asuka is peeking out behind her.

â€œTo commemorate this milestone issue we wanted to do something exceptional for our loyal readership,â€ said Editor-In-Chief Scott Gramling. â€œWe decided a one-of-a-kind cover was something fans would really appreciate. When GAINAX agreed to get involved we knew we had an opportunity to create something our fans would absolutely love and we are very proud of how it came out.â€

Beyond the noteworthy cover, the issue is jam packed with incredible content, highlighted by â€œA Best Anime of All Time,â€ feature which includes nominations from industry personalities, Japanese anime company presidents and famous U.S. voice actors. The feature is sure to cause some controversy as the list is based on quality, not popularity.

Always on the cutting edge of the industry, Pumpkin Scissors, which is being billed as the next Fullmetal Alchemist, receives extensive coverage which includes a recruit’s guide to the unit plus a manga preview and a Best Buy $5 off coupon on the DVD.

Finally, readers have a chance to show off their talents in a haiku writing contest with a grand prize valued at over $1,500.

Anime Insider number 50 will be distributed via direct mail tomorrow and is available on newsstands on October 30. 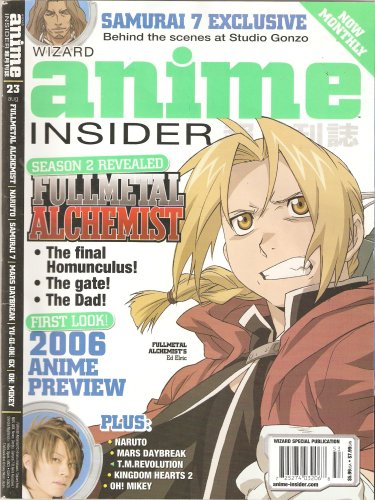