Game Description: The world of the future has fought devastating wars. Massive companies struggle to become more powerful using handfuls of hand-picked mercenaries. Solid Snake, now older and even tougher, is one of those mercenaries. Solid Snake has now been charged with infiltrating a number of targets around the world, including in the Middle East and South America. Many characters from the series are returning, including Meryl Silverburgh, Raiden, and the famous adversary, Vamp. An original, all-new script has been penned for the game, and the voice actors who have brought the characters into the spotlight have returned to make the new game have a old fell.

Review: I usually don’t like army games but this year Konami came out with MGS4 “Meal Gear Solid 4: Guns of the Patriots”. So many people was talking about how great it will be and how it will change the way you picture so called “Army games” too be. So on the Release Date: 6/11/08 I woke up early, went to my local video store and rented it. I must say I hate myself for wasting my time and time because now I got to go buy it when I take the rented copy back in five days. There is not much I can tell you about the game without giving out to much info because so much of it is story-line details that involve the whole MGS legacy.

If you have played it on PS3 then you know what I’m talking about. Metal Gear Solid 4 graphics is one of the best graphics in a game console ever! They keep the same MGS legacy game play as in all MGS games but with a few additions “The Solid Eye being a great addition”. Also with a multi-personal vision tool which is the performance of Snake depends on his metal state. A metal conditioning meter help you keep track if he is calm, relaxed or Stressed and fatigued. If he is calm and relaxed his accuracy and special awareness is sharpened. And objects in the Solid Eye become easier to see. If he is stressed and fatigued then you can not see objects from a distance, enemies that take cover will no longer be shown on the map. A game-play that sucks you in and makes it seem more real than any other army game I have ever played.

The biggest changes to MGS4’s game-play are in the shooting controls, which have never been the strongest point in the MGS series. The game uses a low third-person camera like the one first seen in MGS3. Metal Gear is all about sneaking, but some sections of MGS4 will actually encourage you to go out with your guns and just go crazy. The way you crouch is a lot better and easier than all the last MGS games. Learning to use and using the Military toys in the heat of battle has never been easier.

As you walk through the vast levels you’ll see the incredible details in the level design. If you are a old MGS fan the you played the PS version of MGS. Well without getting into to much detail you’ll find yourself having flashbacks when you get to go where it all started with so much detail to the graphics. You’ll learn about MGS history and you’ll learn about old Patriots. Many characters from the series are returning, including Meryl Silverburgh, Raiden, and the famous adversary, Vamp “one of the best gaming villains ever”. Without giving you to much info some familiar mechanics have changed but not enough to make you second guess who it might be. The Metal Gear Solid 4 release was the spark that ignited a flame in MGS fans hearts again. 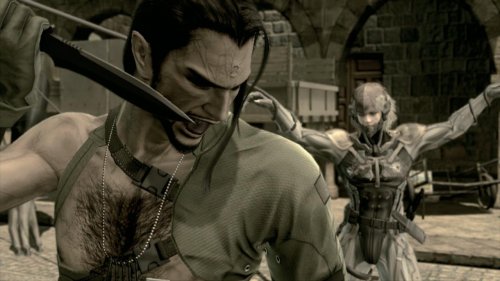