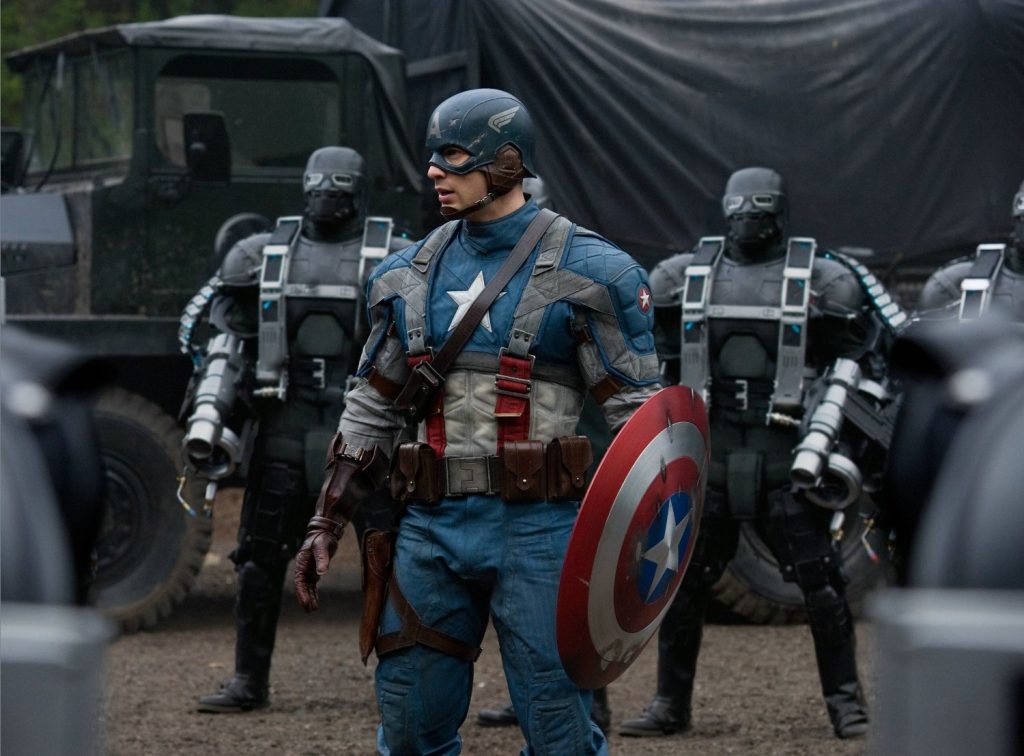 So far, so good for The Avengers this summer. Thor’s a pretty cool guy and now it’s Captain America to show off what he’s got. Sure, he comes with the superhero standards – buff body, noble intentions and a sleek costume – but other than that, he’s nothing more than a poster boy for Marvel movies. Steve Rogers makes for a better propaganda symbol than superhero.

Chris Evans is Steve Rogers, a Brooklyn native desperate to serve his country. Sadly, his intense determination isn’t enough to make up for his slight stature and asthma, amongst other physical deficits, and his enlistment application is stamped with a big red F, time and time again. It isn’t until Steve crosses paths with Dr. Abraham Erskine (Stanley Tucci) that he finally gets the chance to prove himself, well, an enhanced version of himself. Erskine straps Steve to some high tech contraption, pumps him full of glowing blue fluid and so Captain America is born.

Meanwhile, Hitler is building the ultimate weapon for himself, or so he thinks. The Nazi regime funnels resources into their deep science division, Hydra, in hopes that the unit’s leader, Johann Schmidt (Hugo Weaving), will deliver a power the Allies cannot defeat. Problem is, Schmidt is obsessed with some sort of otherworldly power, a power his cohorts don’t believe in. When Hitler attempts to shut Hydra down, Schmidt, or Red Skull, is ready to take the reigns and conquer the world for himself. The only one who can stop him? Guess who.

Sure, Steve Rogers is a noble character and his dream of joining the army is endearing, but the entire first act of the film is tainted by poor CGI. Little Steve looks more like a character out of a Tim Burton animation than he does a legitimate smaller version of Evans. In fact, the character would fit perfectly in Tarik Saleh’s Metropia. The only time the pre-Captain America Steve looks legitimate is when his back is to the camera and that’s because that’s the only time he’s 100% a real person.

Things get much better once Steve emerges from the Erskine pod. A mix-up lands Steve in an army propaganda play rather than on the battlefield and that’s where the power of the cheesy time-lapse montage kicks in. We follow Steve from show to show as he gets into the gig and builds an audience. However, when he takes his act overseas and performs for the soldiers, he’s stopped dead in his tracks, as is the film. The switch is so abrupt between goofy wannabe soldier and man on the front lines that it’s hard to digest. Sure, Steve is far more muscular and has super strength, but what does this guy know about infiltrating a heavily armed compound? And who taught him how to parachute out of a plane in the midst of an airborne firefight?

Of course, any superhero film comes with some believability issues, but that’s the challenge, to overcome them and Captain America just doesn’t pull it off. Much of the blame belongs to some terrible effect work, in terms of little Steve and beyond. It’s so glaringly obvious when practical stunt work is used as opposed to CGI, it’s distracting and takes you out of the film.

In terms of the performances, they’re one note almost across the board. The only person that’s the slightest bit engaging and alive is Toby Jones as Red Skull’s right hand man, Dr. Arnim Zola. He’s a bit of an enigma and the fact that you can practically see the wheels turning in his head makes you desperate to get inside it. Otherwise, Captain America offers up a bunch of straight shooters. Evans is the noble hero, Weaving the dubious villain, Sebastian Stan’s Bucky, the loyal sidekick and Hayley Atwell’s Peggy Carter, the Captain’s crush. They’re playing superhero movie stereotypes and make no effort to take them further.

However, again, this is a superhero movie we’re talking about and that also inherently has the power to be somewhat entertaining when working with the basics. There are some visually stimulating action sequences, cool costumes and poignant hero-saves-the-day moments, but otherwise, Captain America has little to nothing to offer. Then again, there is that teaser for The Avengers after the credits.