Argo and Girls Among Top Winners at 2013 Golden Globe Awards

The 2013 Golden Globe Awards honored the best in film and on television of the past year last night at the Beverly Hilton Hotel in Beverly Hills. The 70th anniversary of the ceremony, which was broadcast on NBC, was hosted by Tina Fey and Amy Poehler. Both hosts, who replaced Ricky Gervais after three years hosting, were nominated for Best Performance by an Actress in a TV Series, Comedy or Musical.

The biggest winners of the night included Ben Affleck’s thriller ‘Argo,’ which won Best Director-Motion Picture. The honor came after the filmmaker was snubbed by the Academy of Motion Picture Arts and Sciences for next month’s Academy Awards. Affleck, who said “I don’t care what the award is” while accepting the directing trophy, also accepted the Best Motion Picture, Drama award.

The acclaimed drama musical ‘Les Miserables’ was also a big winner, having being honored with the Golden Globe for Best Motion Picture, Musical or Comedy. The win edges out its competitor, ‘Silver Linings Playbook,’ in the same category at the Oscars. ‘Les Miserables’ star Hugh Jackman was honored as Best Actor, Comedy or Musical, for his role as Jean Valjean, beating out ‘Silver Linings Playbook’s Bradley Cooper. As expected, Anne Hathaway won the Best Supporting Actress in a Motion Picture for ‘Les Miserables,’ for her portrayal of Fantine.

However, Jennifer Lawrence won for Best Actress, Comedy or Musical, for her role as Tiffany in David O. Russell’s romance-comedy-drama. But her chief competitor in the Academy Award race for Best Actress, Jessica Chastain, won the Golden Globe for Best Actress, Drama. The actress was recognized for her portrayal of Maya in director Kathryn Bigelow’s action drama ‘Zero Dark Thirty,’ which topped the box office this weekend after its expansion into wide release.

Daniel Day-Lewis, the favorite to win his third Oscar next month, won the Golden Globe for Best Actor in a Drama. He was honored for his uncanny depiction of the title role in Steven Spielberg’s historical biography ‘Lincoln,’ which is still doing strong at the box office after two months in theaters.

Quentin Tarantino was the upset winner for Best Screenplay for ‘Django Unchained.’ Many believed the category would be given to ‘Lincoln’ scribe Tony Kushner, the Oscar frontrunner. “This is a damn surprise, and I’m happy to be surprised!” Tarantino exclaimed during his acceptance speech.

For television, Lena Dunham won big, earning the award for Best Series, Musical or Comedy, for her HBO series ‘Girls,’ which was snubbed at last year’s Emmy Awards. Dunham, who also created the comedy-drama show, was honored for Best Actress, Comedy or Musical, for her portrayal of Hannah Horvath. She beat out both Fey and Poehler in the category, which had stiff competition.

HBO’s political drama film ‘Game Change,’ which starred Julianne Moore as vice-presidential hopeful Sarah Palin, won several awards as well. Not only did it pick up the Best Miniseries or TV Movie award, Moore was also honored as Best Actress in a TV Movie or Miniseries. Ed Harris was also named as Best Supporting Actor, for his portrayal of presidential hopeful and Arizona Senator John McCain.

The night’s Cecil B. DeMille Award, which recognizes “talented individuals who have made an incredible impact on the world of entertainment,” was given to actress and director Jodie Foster. The award was presented to her by her ‘Home for the Holidays’ star Robert Downey Jr. During her acceptance speech, Foster acknowledged her homosexuality for the first time in public, after years of rumors. But she asked for privacy, adding “Someday in the future, people will look back and remember how beautiful it once was.”

Some audience members teared up during Foster’s speech, thinking she was announcing her retirement. But the 50-year-old, who has been acting since she was three, later told the LA Times “I could never stop acting. You’d have to drag me behind a team of horses.”

Read the complete list of the winner from the 70th Golden Globe Awards below. 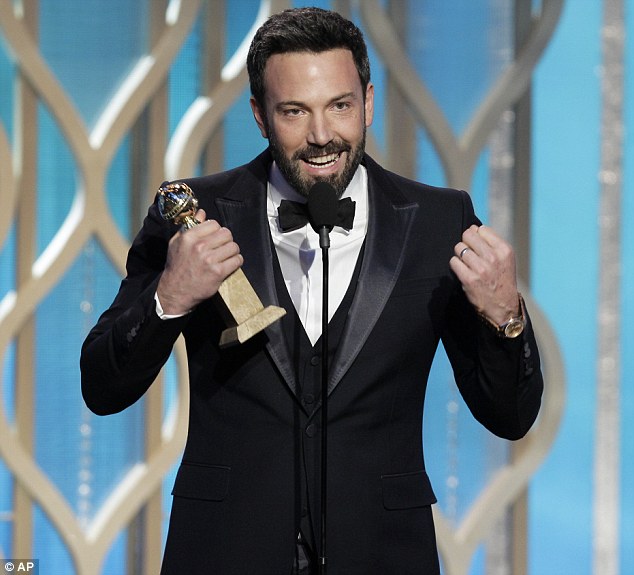