The short that inspired “Mama” is an impressive piece with chilling imagery and a good deal of suspense, but it isn’t a story. It’s more of a single scare and while writer-director Andrés Muschietti and his team do honor that single scare, their attempt to expand upon it results in a handful of less successful permutations connected by a clunky narrative.

In the midst of a financial crisis, Victoria and Lilly’s father whisks them away from their quaint suburban home and takes them to a remote cabin the woods, a place the girls call home for five years until they’re found. Lucas (Nikolaj Coster-Waldau) is thrilled to have his nieces back and takes custody of the girls, but soon after starting their new life, he and his girlfriend, Annabel (Jessica Chastain), realize Victoria and Lilly (Megan Charpentier and Isabelle Nélisse) are exceptionally difficult.

While Victoria does adjust and regains her vocabulary, Lilly, who was only about two or three when she was first left at the cabin, insists on sleeping under her sister’s bed, crawling on her hands and feet, and mumbling to someone she calls Mama. Dr. Dreyfuss (Daniel Kash), the man overseeing the girls’ recovery, insists that Mama is actually just Victoria’s manifestation, someone she’s convinced cared for her and her sister while they were at the cabin – that is until he starts to recognize Mama’s presence himself.

The core concept of “Mama” is notably horrifying; a couple brings two abandoned children into their home, one of which is borderline rabid. You’re thrilled the girls are rescued and back in the care of people who’ll love them, but they’re unpredictable and threatening, infusing the film with a great deal of suspense. However, the supernatural and historical components of the piece are far less effective.

Victoria and Lilly need a backstory, but Muschietti and his co-writers, Neil Cross and Barbara Muschietti, get a little carried away with the details of the girls’ abandonment. A great deal of attention is given to the fact that their parents are suffering through a financial crisis, one that causes their father to totally snap. Much of the story is told through a report coming from the father’s car radio and while it’s an interesting presentation and hints at a fresh and surprising layer of the situation, it ultimately amounts to nothing.

On the supernatural side, Mama comes with some creepy imagery, but she and her haunted house tricks are so clearly visual effects, they instantly become far less frightening. The movie’s best jolts are tacky jump scares, but Muschietti does manage to create an exceptionally eerie environment so while “Mama” is short on memorable horror set pieces, there is a strong sense of dread from beginning to end, and it’s further enhanced by Victoria and Lilly.

Lilly’s behavior in particular is truly unnerving as it’s just downright disturbing watching the kid crawl around on the floor, leap out her bedroom window and indulge in an odd assortment of foods. In fact, it’s so extreme it’s often laughable, but rather than that dilute the experience, it keeps the film from taking itself too seriously, and that could have been detrimental. Charpentier’s performance as Victoria, on the other hand, is far more calculating. Not only is she our prime source of information as the only character that interacts with the people around her and Mama, but she controls the arc of the story because as Victoria changes as a person, the situation changes.

Chastain makes for a fine hero, but Chastain as a hardcore rocker with a semi-sleeve tattoo is a tough sell. However, Annabel’s amusing lack of a motherly nature and overall likability keeps the character strong enough. Coster-Waldau, however, loses the spotlight and he loses it fast. Lucas is presented as the anchor of the film early on, but then, all of a sudden, he disappears from the narrative, leaving Annabel in charge. Chastain has no trouble picking up the slack, but Coster-Waldau does have a tough time returning to the action courtesy of silly plot points and an overall lack of character development for Lucas.

“Mama” isn’t all that scary and the plot points don’t connect as well as they should, but the film stays afloat thanks to a combination of solid performances and an intriguingly whimsical tone. It won’t keep you up at night, let alone make you think twice about it after the credits roll, but “Mama” is passable as a fleeting watch. 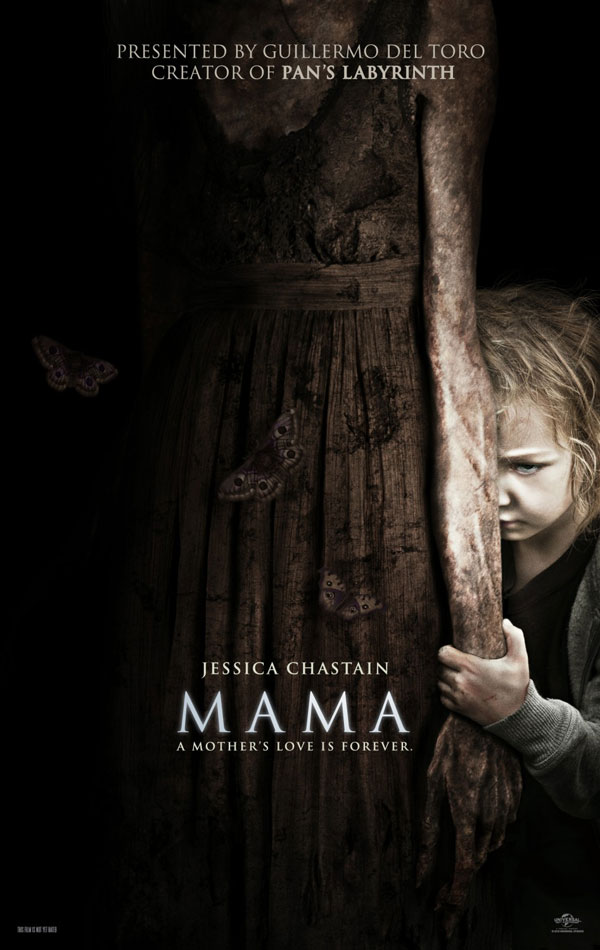