A deeply but pleasantly weird sort of Southern Gothic battle royale, “The Baytown Outlaws” is a boisterous, sweat-soaked mash-up of “The Boondock Saints,” “Smokin’ Aces,” “Wild Things” and “Sucker Punch” (minus the latter’s material excess). While stipulating that it is at its core fairly slight — and also constructed of prefabricated parts and characters who, despite their colorful nature, are basically kind of hoary clichés — it’s also hard to deny that director Barry Battles’ zonked-out genre romp is an awful lot of fun.

“The Baytown Outlaws” opens in Alabama, where three redneck orphan brothers with the surname Oodie — Brick (Clayne Crawford), McQueen (Travis Fimmel) and giant, mute Lincoln (Daniel Cudmore) — serve as bounty hunters under the protective wing of Sheriff Henry Millard (Andre Braugher), cleaning up criminal-types deemed even scummier than they. Their normal methodology of mass erasure, however, gets put to the test when Celeste Martin (Eva) shows up with a freelance gig and $25,000 payday. Her mission: hit the road, snatch her godson Rob (Thomas Brodie Sangster) from her psychotic ex-husband, Carlos Lyman (Billy Bob Thornton), and lay him out as well.

The Baytown boys take the out-of-town job, but fail to kill Carlos. Understandably, he’s piqued, so the Oodies have to deal with looming retribution, while also trying to keep Rob safe and figure out exactly why he’s so valuable to both parties. Further complicating matters is a suspicious ATF agent, Anthony Reese (Paul Wesley), who’s closing in on Sheriff Millard’s complicity in the Oodie boys’ brutal and illegal antics.

Working from a script co-written with Griffin Hood, Battles delivers a pop-cultural pastiche that’s kind of an anti-hero revenge tale. It’s schlocky, really, but possessing a certain mesmerizing charm — in large part because of its look and construction. A thin sheen of sweat and humidity comes off of director of photography David McFarland’s compositions, complementing the grungy production design of Monroe Kelly.

The plot devices and supporting characters (Carlos dispatches various collections of ethnically-grouped assassins, from whom the brothers Oodie escape) translate like some dime store pulp novel, which is at first kind of fresh and invigorating in its unhinged spontaneity, but after a while a bit reductive. The particularly early work of Quentin Tarantino is obviously something of an inspiration as well, though having Michael Rapaport ad-lib doesn’t match up with the “Pulp Fiction” and “Reservoir Dogs” auteur’s ear for dialogue. “The Baytown Outlaws” connects more robustly on the subversive merits of its nutty characters; Crawford and Fimmel deliver solid work as the bickering Brick and McQueen. Thornton, meanwhile, is mainly just afforded the chance to chew a bunch of scenery and spit out dialogue that’s offhand amusing (“Hey, how come she’s not naked?” he queries a henchman regarding a girl wandering through his lair) and/or sardonic and menacing.

“The Baytown Outlaws” reaches a certain point of diminishing return, particularly as it tries to pivot in its third act, and deliver a more reasoned, grounded moment of emotional growth for the Oodie brothers. It’s more successful when it’s just wheeling and dealing, in batshit-insane fashion, through oddball set-ups and gnarly, knotted retribution. Still, the originality on display makes this energetic crime comedy curio worth a look for fans of the actors, certainly, and low-budget genre enthusiasts to boot. 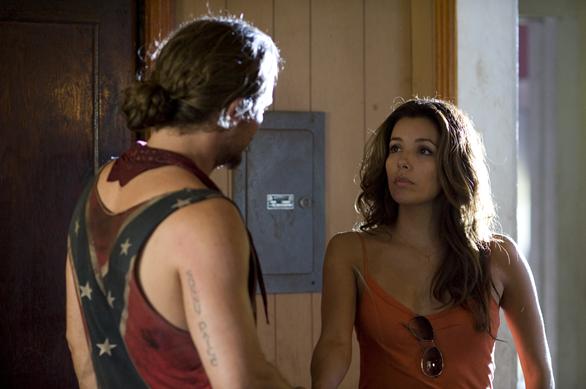