‘Argo’ and Daniel Day-Lewis have solidified their front-runner status in their respective races for next month’s Oscar ceremony, after winning two of the most coveted statues at last night’s SAG Awards. Ben Affleck’s CIA drama won the trophy for performance by a cast in a motion picture. The movie’s chances to win the best picture at the Academy Awards continued after it also won the best picture trophy on Saturday night at the Producers Guild Awards. Day-Lewis, meanwhile, received the SAG Award for lead actor for his performance as the title character in ‘Lincoln.’

The SAG cast award is often seen as the predictor of the best picture Oscar, as many of the guild’s members also belong to the Academy of Motion Picture Arts and Sciences, which votes on the Academy Awards. Actors comprise the largest voting bloc of the academy. ‘Argo’ beat out fellow contenders ‘Lincoln,’ ‘Les Miserables,’ ‘Silver linings Playbook’ and ‘The Best Exotic Marigold Hotel’ for the SAG cast award.

“I absolutely thought there was no way we would win this award,” Affleck said backstage at the Shrine Exposition Center, after accepting the cast award. “You look at ‘Silver Linings Playbook,’ ‘Les Miz,’ ‘Lincoln’ — I thought, ‘well, no matter what happens, I know we won’t win, and I’m OK with it.'” The director thanked all of the actors who appeared in the film, including the extras who didn’t have dialogue. “They wanted to kill it to make the movie better,” he said.

Day-Lewis, who has been the front-runner for the best actor Academy Award since he won the Golden Globe ceremony earlier this month, he congratulated his fellow performers in ‘Lincoln.’ The actor described the statue as an ensemble award that he’ll share with his co-stars.

“For some reason, the guiding principle of the Hippocratic Oath kept nagging at me: First do no harm,” Day-Lewis also said during his acceptance speech. “Then it occurred to me that it was an actor that murdered Abraham Lincoln. Therefore, somehow it’s only fitting that every now and then, an actor tries to bring him back to life again.”

Other winners of the night include Jennifer Lawrence, who accepted her first SAG for her lead role as the mentally unstable Tiffany in ‘Silver Linings Playbook.’ The actress thanked MTV during her acceptance speech, as she received her SAG card for her role on ‘My Super Sweet 16.’ She also thanked the romance comedy-drama’s helmer, David O. Russell, whose own son has mental health issues.

SAG voters also selected Anne Hathaway as female actor in a supporting role for her performance as Fantine in ‘Les Miserables.’ Hathaway thanked her mother, who’s also an actress, during her acceptance speech. “I got my SAG card when I was 14. It felt like the beginning of the world,” she said.

Alec Baldwin presented the Life Achievement Award to Dick Van Dyke for his decades of work in film and on television. The ’30 Rock’ star filled in at the last minute to give Van Dyke the honorary prize after the actor’s former co-stars, Carl Reiner and Mary Tyler Moore, became ill with the flu. “If this heavy object means I can refer to all of you as my peers, then I’m a happy man,” Van Dyke said during his acceptance speech.

For the television awards, Baldwin and Tina Fey won the awards for best comedy performers. It was the actor’s seventh-straight win, and the actress’ fifth SAG win. “Oh, my God. It’s ridiculous,” Baldwin said during his acceptance speech. “It’s the end of our show, which is sad. Everybody is sad about that. It was the greatest experience I’ve ever had.”

‘Modern Family’ won its third consecutive SAG award for best cast in a television comedy show. One of the series’ actors, Jesse Tyler Ferguson, accepted the award, thanking the makers of ’30 Rock’ and ‘The Office’ for setting “the comedy bar so high.” He joked that if any of the actors from the two departing shows need jobs, to contact the casting director for ‘Modern Family.’

Check out the complete list of winners from the 19th Annual SAG Awards 2013 below.

Actor in a movie or miniseries: Kevin Costner ‘Hatfields & McCoys’

Actress in a movie or miniseries: Julianne Moore, ‘Game Change’ 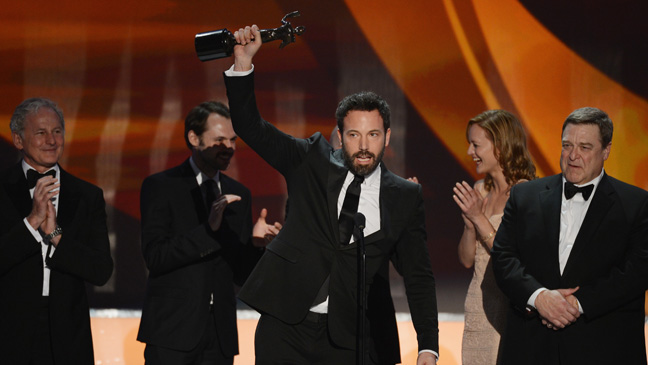