Danielle Panabaker is no stranger to big-screen gnarliness, having co-starred in horror fare like “Friday the 13th,” “The Ward,” “The Crazies” and even “Piranha 3DD,” in all its goofy, gory glory. In her new film, though, writer-director Austin Chick’s “Girls Against Boys,” Panabaker is on several occasions the one wielding weapons rather than being terrorized. She stars as Shae, a naïve college student who, after getting dumped by her married older lover (Andrew Howard) and victimized by a scuzzy guy (Michael Stahl-David) she meets on the rebound at a party, gets drawn into a twisted plan for revenge by her coworker Lu (Nicole LaLiberte). Together, the two embark upon a gruesome killing spree. For ShockYa, Brent Simon had a chance to speak to Panabaker one-on-one this week, about her take on the twisty movie, and why she’s probably done for good with Captain Crunch cereal. The conversation is excerpted below:

ShockYa: How did the movie first come your way, and what was your reaction to the script since the film can kind of be interpreted at least two ways?

Danielle Panabaker: Absolutely — [just] that I think was my initial reaction. It’s a film — even from the first read-through of the script — that left me asking questions, and I wanted to know more. For me, I think that’s always a sign of something intriguing. So that’s where it started. The script was sent to me and I was out of town shooting something else so I hopped on Skype to chat with Austin and really get his perspective, and see where as a writer-director he was coming from — how he saw these characters and their relationship and journey.

ShockYa: In that conversation with him, since it sounds like the script really embodied that ambiguity quite well, did he pull back the curtain a little bit or did he, as some artists do, say, “Hey those are both valid interpretations” (of the story)?

DP: That’s exactly what he said, and I ultimately had to come to a conclusion myself, for my own work on the character, as to just how I perceived everything. So we had a lot of conversations. I think I was definitely the chatty actor — talking about my process and what I was working on, my thoughts — and getting some guidance from him as to what he was looking for, just in terms of Shae’s experience as she starts to cope with this really traumatic event.

ShockYa: Had you met Nicole (LaLiberte) previously, and what sort of discussions did you have with her, if any, because it’s one thing to have those interior process discussions with the filmmaker, but when you’re working with an actor so intimately you have to be if not on the same page then at least in the same chapter, I guess.

DP: I don’t know, because I made the decision that I wanted to give Nicole her own space and also have my own space. We did get to meet each other and definitely spoke about the options (of how to read the story), because these girls do have such an intimate relationship — that’s a great way to describe it — and there are scenes that didn’t make it into the final cut that help define their rerlationship a little bit more. But speaking to the existential question of these girls and their relationship, I wanted to do my own thing and I wanted to give her the option to do the same, and I think it worked out fine, it worked out really well. My guess would be that we had different perspectives on it, but I think that just adds to the chemistry between the two of us.

ShockYa: Did Austin mention any other films of inspiration upon which he drew for “Girls Against Boys,” or some of the other works that helped spawn his idea for it?

DP: I think he’d actually written the screenplay about 10 years ago. I think he’d had it for a while before he took it out to get made, but he did give me several films to take a look at before heading to New York to shoot. “Lilya 4-Ever” (directed by Lucas Moodysson) is one that I remember off the top of my head. He has a more European sensibility and what I really took away from “Lilya 4-Ever” was that sort of fantasy world that in that movie those two young kids are in, and that in “Girls Against Boys” two women participate in.

ShockYa: Regardless of whatever else one might think of it, the movie I think has some insights into not only predatory male behavior but also the so-called male gaze, and the feelings that can engender. This sounds like a terribly creepy question, but given the subject matter of the movie do you have any uncomfortable memory of something like that?

DP: I’ve been fortunate enough not to experience anything physical like this, but I think everyone can relate to having some time when they felt violated in some way, shape or form. And that’s what’s relatable in this fantasy film — we can all think of an instance where we wish we could get back at someone who hurt us, or we wish that they could understand the pain that they caused us. This is just Shae’s version of dealing with that — her coping mechanism, if you will.

ShockYa: Finally, a lighter question, then — were you aware of the exact vitamin content of Captain Crunch (as shared in one of the movie’s more memorable dialogue exchanges, between Shae and Lu)?

DP: I was not aware of the vitamin content, and I will probably never, ever eat Captain Crunch again in my life. I got so sick of it! That was such a long scene, and we’re supposed to be voraciously eating — especially my character, who (during the last portion is) not speaking to the other characters. So I was just inhaling it — and it’s a long scene and you have to maintain continuity. I can say pretty confidently that I will never eat it again, unfortunately.

ShockYa: Hey, it could be a great tie-in — the official breakfast cereal of “Girls Against Boys.”

DP: Yes! When I speak to Austin, I’ll tell him you said that. 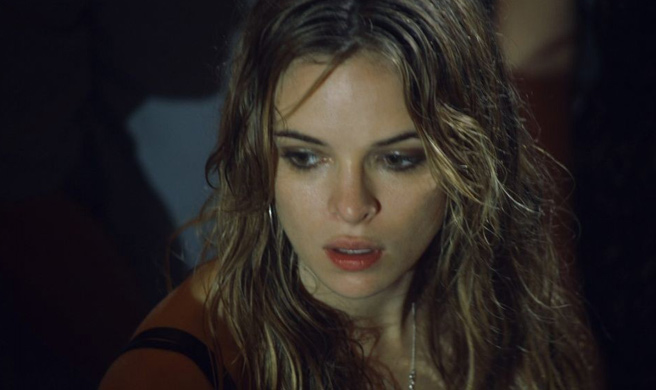