With the Grammy Awards this Sunday, I thought it would be best to acquaint you, Shockya readers, with the “Best New Artist” contenders. Although this category has churned out some very successful artists, such as Adele, Maroon 5, Tracy Chapman and Cyndi Lauper, it has also been the sole claim to fame for others and is often referred to as a “cursed” award, where gradually the winner loses appeal within the music scene.

While I wouldn’t mind only having that accolade, I can’t help but think some of these singers would choose to trade the award for a better shot at a lengthy career. Only of course, if they too believe the category is cursed. The past and now “faded” winners include such artists as Esperanza Spalding, Paula Cole, Arrested Development and Christopher Cross. Yes, you can argue with me for days that you still listen to these artists frequently, but if you look at who they were up against back then, you will see that their competitors’ careers remain intact well into 2013.

No matter what, this prized section will leave us with some future hit tunes, maybe just not from the artist at this year’s podium. Check out the quick facts below on the 2013 Best New Artist nominees.

Frank Ocean
1. He has written songs for Beyoncé, John Legend and Justin Bieber.
2. His mixtape, “Nostalgia, Ultra”, catapulted him onto the scene.
3. He appeared on “No Church In The Wild” and “Made In America”, which are tunes off of Jay-Z and Kanye West’s joint album, “Watch The Throne”.
4. Before moving to Los Angeles, Ocean was a student at the University of New Orleans when Hurricane Katrina hit.
5. “Channel Orange” recently went gold, selling 500,000 copies.
The Lumineers
1. Members Wesley Schultz and Jeremiah Fraites first ventured off in the music scene in New York City. Due to everyday struggles, the duo relocated to Denver Colorado.
2. Shultz and Fraites met Neyla Pekarek by posting a Craigslist ad for a cellist.
3. The trio is signed to Dualtone Records (Shovels & Rope, Fort Atlantic).
4. The song, “Ho Hey”, is their first double platinum single.
5. Their self-titled debut album is certified gold.
Fun.
1. The trio consists of Nate Ruess of The Format, Andrew Dost of Anthallo and Jack Antonoff of Steel Train.
2. Their first album, “Aim and Ignite”, dropped in 2009. The album peaked at 71 on the US album charts.
3. Lead vocalist, Ruess, co-write Ke$ha’s single, “Die Young” off of her second album, “Warrior”.
4. Guitarist, Antonoff, dates HBO’S Girls’ creator, Lena Dunham.
5. Fun.’s second album, “Some Nights”, went gold and has sold over 900,000 copies.
Hunter Hayes
1. Born in Louisiana, Hayes is a country singer, who dropped his self-titled debut in 2011.
2. The album’s second single, “Wanted”, hit number one on the billboard Country Charts, making Hayes the youngest solo male act to top the Hot Country Songs.
3. He is the youngest member to be inducted in the Louisiana Hall Of Fame.
4. Hayes has performed for President Clinton, played with Johnny and June Cash and appeared with Robert Duvall in “The Apostle”.
5. His single, “Wanted”, is his first gold digital sale.
The Alabama Shakes
1. The outfit consists of lead vocalist, Brittany Howard, guitarist, Heath Fogg, bassist, Zac Cockrell and drummer, Steve Johnson.
2. Howard and Cockrell met in high school in a psychology class in Athens, Alabama.
3. The Shakes was their original name.
4. The quartet opened several dates for Jack White in 2012. The Alabama Shakes also released a live 7” series, which featured “Be Mine” and “You Ain’t Alone”, on White’s label, Third Man Records.
5. Their debut studio album, “Boys & Girls”, topped the first ever “Record Store Chart”, which is calculated on physical sales from independent records. The outfit beat out Adele’s “21”, and Trembling Bells’ “The Marble Downs”. 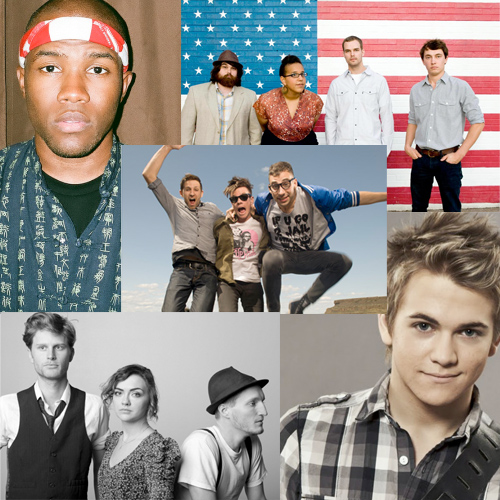