Special Features: Episode Commentaries by Cast & Crew, “On the Floor at All Saints” Featurette with Lenny

Nurse Jackie is back for a fourth season and she’s determined to finally get clean. With the help of Dr O’Hara (Eve Best), she gets into a rehab center and befriends a 17 year old drug addict named Charlie (Jake Cannavale). Jackie’s marriage is over, her daughter Grace (Ruby Jerins) is becoming increasingly rebellious and bratty and the new hospital director Dr Mike Cruz (Bobby Cannavale) is a giant tool. Jackie thinks she may have a chance to get her marriage salvaged until she is served with divorce papers. Will the stress from her job and failed marriage cause Jackie to rebound?

Can anyone tell me what’s the deal with Peter Facinelli’s eyes in the first few episodes of this season? Is it the fault of the make-up department or did he get some jacked surgery? If it’s the latter, dude you’re too young for that crap and you don’t need it. If it’s a medical issue, my apologies for bringing it up. On a positive, his character is much more endearing and likeable.

The special features are pretty standard with the episode commentaries and gag reel. The “On the Floor of All Saints” is a featurette on the actors who portray the male nurses and EMT at All Saints Hospital and “Cruz Control” is a featurette on father and son Bobby & Jake Cannavale who portray father and son on the show.  I didn’t pay attention to the credits and was amazed at the casting department for selecting a Jake that looked so much like Bobby. Duh.

I have been a fan of Nurse Jackie from the beginning and the show just seems to be getting better. The cliffhanger from this fourth season was so shocking and sad, I am waiting with bated breath to see what happens next. 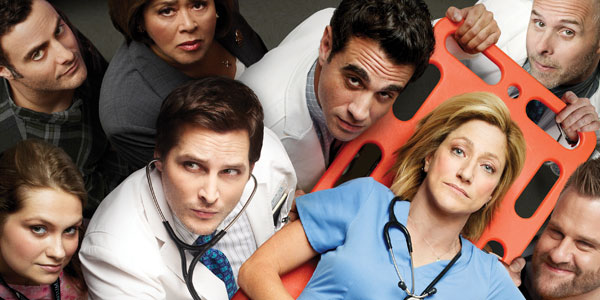