Somewhere between 1995’s Die Hard With A Vengeance and 2007’s Live Free Or Die Hard John McClane went from being a cop with a bad life to full fledged superhero with a bad life. True, most of us grew up with McClane, and that alone would elevate him to such status, the everyman quality present in the original film is what makes that now twenty-five year old classic stand on its own legs.

But here we are, five films in with A Good Day To Die Hard, a movie that has more in common with Die Hard 2 than it does the original. That could be taken as a knock on the film, but it’s not, as A Good Day is a fun, kick-ass action film. Those looking for Willis’ John McClane to go back to his roots will be disappointed. This is superhero McClane doing what he does best; shooting bad guys, taking ungodly amounts of punishment, and losing what can now be considered liters of blood. Unfortunately he sprouts too few one-liners than his previous installments, although everyone’s favorite line is in tact, unaltered.

Director John Moore is clearly more interested in how much collateral damage he can cause in Russia rather than a coherent plot or story. He’s not helped by Skip Woods’ script, which is only concerned with getting the characters from point A to point B, and while no villain in this series will be as memorable as Hans Gruber, it’s sort of a shame Sebastian Koch’s Komarov won’t be remembered as much more than “carrot eating dancer.”

That makes it all the better than Moore is more interesting in crafting exciting set pieces, and oh how bombastic they are. Where Len Wiseman’s effort (the previous Live Free) wanted to bog us down with technical mumbo jumbo and a wasted villain, Moore barely gives us a chance to breathe, and for much of the running time is a non-stop roller coaster ride of thrills. There are some cheer worthy moments, the chief of all being when McClane and son Jack (Jai Courtney) race through a Russian Hotel while a helicopter unloads round after round at them.

Moore’s cast is able to get him by, with Willis being comfortable in his role as McClane. He has terrific chemistry with Courtney’s Jack, and they are believable as a bickering father and son. Sebastian Koch’s aforementioned Komarov does entertain when he eats carrots and dances, although he never feels like a threat. Yuliya Snigir delivers the sexy as Komarov’s right hand Irina, and lets her devilishly delicious eyes do the talking for her, and her body in that leather suit.

But this is still Willis’ franchise, and even if McClane has now transformed into the superhero we all grew up with, there’s still a bit of fun to see him be the only option to save the world. Maybe that’s made this franchise self-aware, but that certainly hasn’t removed how much fun these pictures have remained for twenty-five years. John McClane is a true American hero, and A Good Day To Die Hard completes his transformation into full fledged superhero. It’s difficult to say how much is left in the tank, but if the last outing is as fun as this newest adventure, it’s a safe bet McClane won’t go quietly. 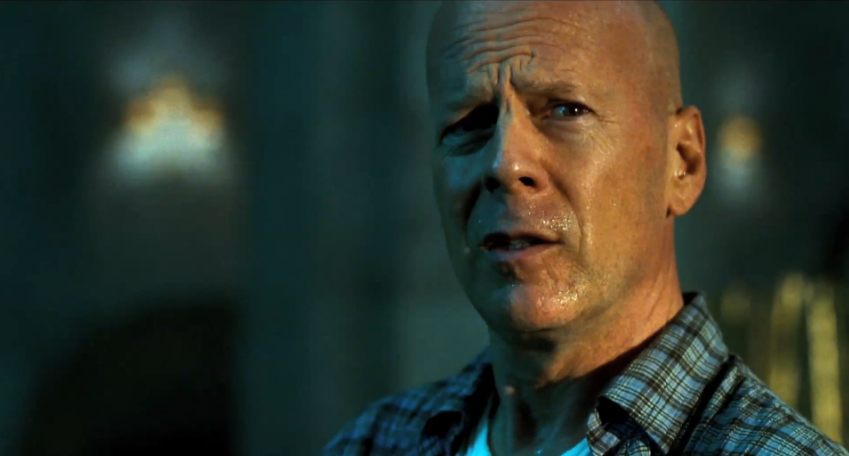