Screenwriter: Richard LaGravanese from his adaptation of Kami Garcia and Margaret Stohl’s novel

Don’t look for logic here, as “Beautiful Creatures” is a supernatural love story. But that’s the way it should be: who says that love is logical anyway? Richard LaGravenese’s adaptation of Kami Garcia and Margaret Stohl’s recent novel is the kind of movie that’s an ideal choice for you for Valentine’s Day which, not coincidentally is the date of its opening. The film features a pair of star-crossed lovers, Ethan Wate (Alden Ehrenreich) and Lena Duchannes (Alice Englert), two performers who are not exceptionally well known but who have been seen, respectively, in Francis Ford Coppola’s “Tetro” and in Sally Potter’s “Ginger and Rosa.”

The tale of Alden and Lena could be looked on as one which shows empowered women since, after all, Lena possesses the mystical ability to create storms and break glass windows. On the other hand, however, the narrative toys with the old cliché of vulnerable women who have been saved by men. Whence comes this paradox? We look into their lives, which are not particularly enviable until, of course, they get together and use the power of love to rout all that impedes them from joy.

The story is set in the tiny town of Gatlin, South Carolina–actually filmed by Philippe Rousselot in Louisiana not too far from New Orleans. Ethan is popular enough, a Varsity athlete but one who admits that he’s not much for parties. He’s an aw-shucks kind of guy who complains that the town is too conventional, nothing to do—typical teen talk spoken by kids who probably would not particularly care to live in Chicago or L.A. He’s a good-looking lad with an aggressive but religious girlfriend whose interest is not really shared by Ethan. But sparks fly when he meets Lena, a new girl in town, who is shunned by classmates and apparently friendless because rumors fly that her reclusive, rich uncle Macon Ravenwood (Jeremy Irons), has too much influence in the town he founded.

When strange things go on such as the shattering of all the windows in a classroom, some suspect that Lena had something to do with it, and they would not be wrong. At a church meeting, Mrs. Lincoln (Emma Thompson) pushes a petition to expel the lass from the school. If only she knew (or does she?) that in a matter of weeks, when Lena turns sixteen, she—a Caster, i.e. a witch—will be Claimed. She will be chosen from a battle between the forces of Light and Dark, and what’s more, any mortal she loves romantically will die.

As the romance between Ethan and Lena proceed according to the usual rules of dating—except that Ethan will have to overcome Lena’s reluctance to be responsible for the young man’s death—we in the audience become privy to a startling and effective series of effects. The large, gothic manor that houses Lena’s uncle changes both shape and color depending on the moods of the occupants. A table at which are seated guests that for good reason dislike one another is set spinning like a runaway carousel. A reenactment of a Civil War battle fought December 21, 1863 on the land of this small town takes place. A similar battle opens the movie, with Ethan’s hazy, yet scary, dream in which he is on the battlefield and meets the girl he always wanted, one who looks surprisingly like Lena. But the dream always ends with his being struck dead by lightning. In that church, where hundreds call for the expulsion of Lena from the school, Lena’s uncle not only arrives to condemn the inquisition but in the picture’s most magical scene literally stops time for several minutes, emptying the pews, to allow for his discussion with Mrs. Lincoln. The secrets of this unusual family are held by Amma (Viola Davis), the town librarian, who has watched over young Ethan, and who bears witness to the apocalyptic battle about to take place.

Whether there is palpable chemistry between the two leads is debatable. They kiss quite a bit once Lena overcomes her fear that she may soon be involuntarily killing her man, but since this is a PG-13 film, their lips are closed. Sometimes it looks as though they’re in a clinch like two fighters.

All in all, “Beautiful Creatures” succeeds in casting a moderate spell over the audience, inhabits a style that makes it superior to the “Twilight” series. It has more light touches and at times you suspect that the players would like occasionally to wink at the audience. The movie possesses a good sense of what life is like in a conservative southern time that—if you believe that Mrs. Lincoln represents the populace—hates Democrats, liberals and homosexuals. The two authors whose novel is adapted state in the production notes that they were “always captivated by fantasies” (Stohl) and “loved stories set in the South” (Garcia). And that’s just LaGravanese’s adaptation gives us. 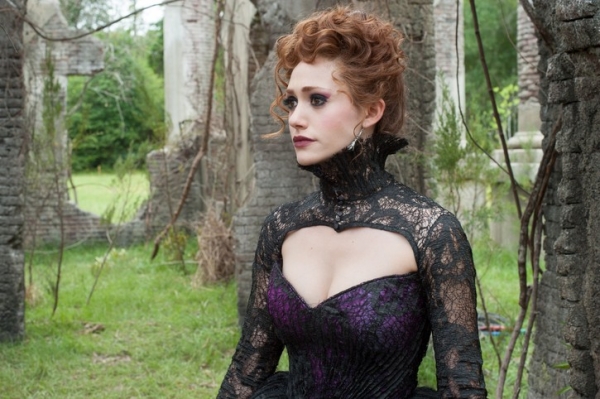 Cancel reply
Box Office Predictions: Safe Haven To Earn The Most Love
Giveaway: Win Swag From 21 And Over
To Top