You’re probably wondering how a film starring Christopher Walken, Alan Arkin, and Al Pacino could possibly be anything other than a hilariously enjoyable experience. Somehow it winds up being the exact opposite: a messy, unfunny, paper-thin characterization of aged gangsters who find themselves at odds with the modernized world of organized crime. Stand Up Guys, directed by Fisher Stevens, features a terrific cast of actors who are given very little to work with. It seems almost implausible that when you’re given such talent, you somehow squander it with a lack of character depth. While Fisher does try and let the characters play off one another, the jokes are simply not funny, nor does there seem to be any brotherhood or camaraderie between them. While the end result is admirable–even a little endearing–it looks and feels more like a made for TV movie.

From the beginning, Stevens sets up an old-school atmosphere with Bon Jovi playing over a montage, while adding a smooth, almost jazzy aesthetic to his shooting style. Al Pacino plays Val who has just been released from prison. Doc, played by Walken, is Val’s closest friend and longtime accomplice. They are reunited for the first time in 28 years. In spite of their closeness in age, what’s interesting is that Doc and Val are at two separates stages in their lives. While Doc seems acutely aware of his old-age, Val is eager to party and cause some mayhem. This is essentially the jumping off point for many of the plot points in the narrative. For some strange reason, they don’t play off each other as well. Almost immediately, Val is aware that Doc has been hired to kill him because of some past event that involves their boss. It is set to happen at 10am the next day. With these two, you would expect that the night would be chaos, but it turns out that it feels very smoothed over. Stevens’ direction lacks the very mayhem that the script needs.

One scene in particular that showcases that sad unoriginality behind much of the humor is where Val takes an excess of erectile dysfunction pills and winds up in the hospital. This feels like a joke that’s been used before, and Stevens’ reliance on dirty jokes is more than telling about the nature of the script. Later enters Alan Arkin, who is sorely underused. Even though he has little to no impact on the action, he still showcases his comedic timing on occasion. Arkin plays Hirsch, who currently resides in a nursing home. He is found using an oxygen tank, but yet it’s never brought up when they help him escape. Does he not still need it? Putting that aside, Hirsch is a character that makes little sense in the context of the plot. He doesn’t serve much of a purpose in the growth or development of Doc or Val, or even himself. What exactly does he do?

This was excruciatingly hard for me to watch all the way through. Numerous times I found myself rolling my eyes at the contrived enthusiasm from Pacino, who I can only credit to have done his best to make his scenes even remotely funny or endearing. Even more surprising is Walken’s dull, withdrawn expression throughout the film. But who am I kidding–this is clearly the work of a director who couldn’t muster up the enthusiasm for his own film. You can only go so far with great actors, as many directors have shown in the past. It’s careless, flat, uninspired, and banal. 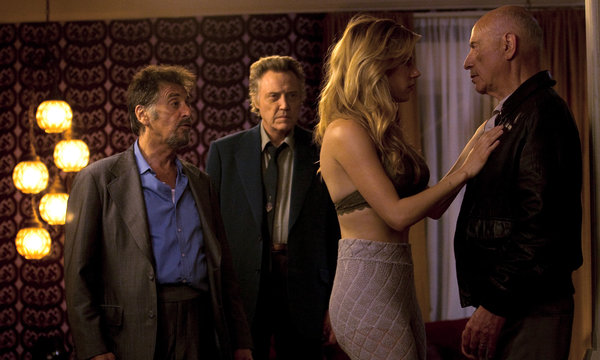