In addition to a slew of recent books, “Saving Lincoln” arrives on the heels of Steven Spielberg’s Oscar-nominated film, just in advance of this weekend’s Tom Hanks-narrated “Killing Lincoln” on National Geographic, and not far behind a piece of mash-up entertainment that repositioned the 16th president of the United States as a neck-slashing sworn enemy of vampires. So what could director Salvador Litvak’s micro-budgeted curiosity possibly contribute to the Lincoln canon? A decent bit, it turns out, if primarily for history buffs and open-minded arthouse cineastes.

The film is notable for two reasons — the first, and most readily apparent, being that it’s built around a novelty compositing scheme that uses historical photographs to build scenic 3-D backdrops (more on this later). But “Saving Lincoln” also filters the story of Lincoln’s ascendency and presidential struggles throughout the Civil War through the eyes of Ward Hill Lamon (Lea Coco), his former law partner and confidant. When the first attempt is made on Lincoln’s life, in 1861, Lamon appoints himself the President’s bodyguard. This narrative prism gives Lincoln’s various subsequent crises of confidence a distinctly personal and human weight.

Some of the movie’s drama is too on the nose and characterized by speechifying (Penelope Ann Miller appears as Mary Todd Lincoln, Bruce Davison as William Seward, Josh Stamberg as Salmon P. Chase and “The Office”‘s Creed Bratton as Senator Charles Sumner), and other bits are outright tinny. The performances vary, too. Coco is all blustery earnestness, and Tom Amandes, as Lincoln, doesn’t fully capture the in-his-bones weariness Lincoln feels from the weight of the war, instead relying on actorly mannerisms and tricks. Still, “Saving Lincoln” is an unusual exception to an old screenwriting rule — a movie whose framing device benefits and saves it much more than its actual execution.

Part of this has to do with some of the inherent interest and gravitas attached to certain scenes in and of themselves (Lincoln’s arguing of the Emancipation Proclamation before his cabinet, and the Gettysburg Address), but a lot of it also has to do with the film’s look, which alternately enchants and lowers one’s demands or expectations of the movie. Working with cinematographer Alexandre Naufel, Litvak achieves a look that might be best described as a sort of ultra-low-budget “Sucker Punch,” with washed-out sepia tones dominating green-screen-type backgrounds for which unerring dramatic realism is not the aim. Were the script tighter, it would be interesting to see Litvak’s approach applied in an even much more aggressively minimalist style (think Lars von Trier’s “Dogville”), to further spotlight and artistically re-contextualize the stakes of its stark arguments regarding liberty.

Still, almost in spite of itself sometimes, perhaps because just it spans a greater period of time than Spielberg and Day-Lewis’ recent big-budget collaboration, “Saving Lincoln” connects as an ancillary curio about the man and his struggles. History buffs will certainly dig it, and arthouse aficionados could certainly do far worse than to spend another 100 minutes getting lost in the struggles of this fascinating, steel-willed man. 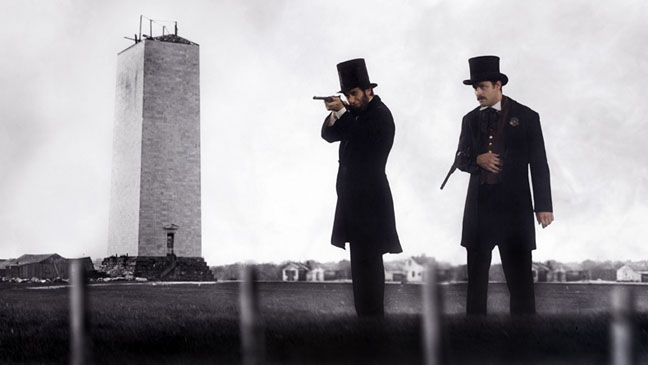