“Dark Skies” is far from a haunting masterpiece, but the February debut, lack of pre-release screenings and rather weak promotional effort gave the film a much poorer reputation than it deserves.

The Barretts are struggling with some financial issues, but otherwise, live a nice life in a quaint suburban neighborhood – that is until their home becomes the focal point of inexplicable, disturbing events. Lacy and Daniel (Keri Russell and Josh Hamilton) are able to dismiss the first few bumps in the night as alarm malfunctions and bad dreams, but when the threats become even more devastating and increasingly violent, they have no choice, but to address the fact that something might be after them.

In an industry oversaturated with paranormal entities, the E.T.-related scares in “Dark Skies” are rather refreshing. There are some outrageous and almost silly moments like the tower of kitchen condiments and Lacy being forced to bash her head against a window, but we’ve also got a few big winners, namely things that can give you the creeps in a movie or in real life. The sound of the house alarm going off is endlessly unnerving as are the assortment of violent blemishes on the family’s bodies.

But even with some solid set pieces and eerie imagery, the film’s scare factor is greatly reduced by the predictable nature of the material and pacing problems. Like we’ve seen time and time again, “Dark Skies” kicks off on any normal day and then slowly, creepy things start to happen, becoming more and more intense with each passing day. We expect it, so even though the scares become grander and grander, we’re already one step ahead. And the same goes for the finer details of the plot. Of course Daniel is going to set up security cameras and of course he’s going to catch strange late-night activity on them. Of course Lacy is going to start Googling and of course she’s going to track down the one weirdo with all the answers.

While the film’s slow pacing does make it feel far longer than 95 minutes, in a few instances, it does help thwart expectations, resulting in some well-earned jolts. For example, the reveal of little Sam’s (Kadan Rockett) bruised body isn’t as shocking having already seen it in the trailer, but it’s intercut with one of Jesse’s (Dakota Goyo) encounters, laying the groundwork for that moment, making it far more impactful than it would have been on its own or if it had piggybacked another big scare.

The pacing also allows “Dark Skies” to present itself as a mystery just as much as a horror thriller. The details are typical, but by giving the assortment of more curious elements the chance to simmer, we’re enticed to learn more and try to connect the dots. The cast also deserves a great deal of credit for creating that need to know. There’s a hefty handful of lame lines of dialogue that could sound distractingly ridiculous, but Russell, Hamilton and Goyo are very clearly giving the material their all. They manage to successfully sell the family dynamic and, for the most part, the gravity of the situation, too.

Even though “Dark Skies” boasts strong performances and a number of intriguing and respectable choices from write-director Scott Stewart, overall, it just isn’t thrilling or novel enough to make much of an impact. However, the likable characters, eerily aesthetic imagery, and the more creative plot points could be enough to make “Dark Skies” a worthy at-home watch, albeit not eradicate the fact that it’s still a missed opportunity. 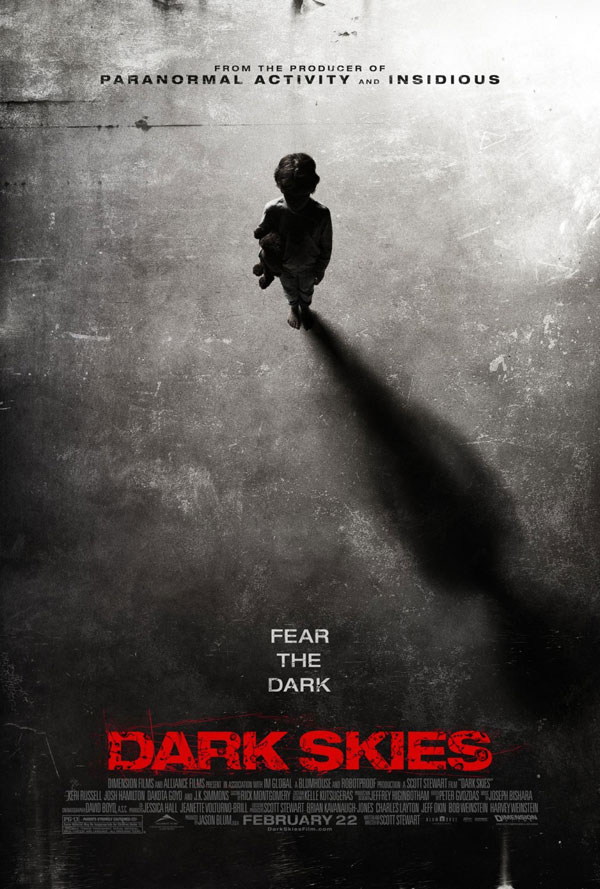