The good news is that Julianne Moore is able to keep a straight face in the role. The bad news is that the audience will find it difficult to suppress laughs—and this is not a comedy. Måns Mårlind and Björn Stein’s psychological thriller cum horror tale features an investigation into a man’s multiple personalities, three in all, but strangely enough most of them are from characters that have been recently or long since dead. What’s more, he seems able to know things that only those alternate characters knew. There is probably such a thing as multiple personality syndrome, though the forensic psychologist in the lead role does not believe in the thing, but how to explain this eerie knowledge of matters like where that hidden tattoo has been placed?

Jonathan Rhys Meyers shares the principal roles with Julianne Moore, he as David and Adam and Wesley while she is his (their?) doctor, Cara Harding. Cara is pressured by her dad, Dr. Harding (Jeffrey DeMunn) to think outside the box, believing that she has become too routine in her daily job and is not asking the right questions. This leads Cara to go off the wall in seemingly giving up all her cases except this one, or three, the case of the mysterious and mystical David/Wesley/Adam. Though Julianne Moore has played it neurotically safe in the past (as Carol White in Todd Haynes’ 1995 movie “Safe”) she has not learned her lesson in her present guise, because she follows this dangerous fellow around in the dark and in places inhabited by laughably spooky witches.

Cara interviews David at length while her dad watches behind a large, one-way mirror. Cara also interviews Mrs. Bernburg (Frances Conroy), whose son was murdered and whose persona is one of those taken on by David. Among the mysterious occurrences are people coming down with serious coughs (we see faux-archival film taken ostensibly in 1918 when people were dying from the influenza epidemic). We hear at least one witch utter curses. We see crosses carved ritually into people’s backs and do not wonder that David (or is it Adam or Wesley) is intrigued by the crucifix around Cara’s neck.

The generic shock music is put to use to get audiences titillated and scared, but the only thing scary is that Julianne Moore must have been desperate to agree to this role. As for audience interest in multiple personality disorder, Robert Louis Stevenson had the right idea: Two are interesting; more’s just a crowd. 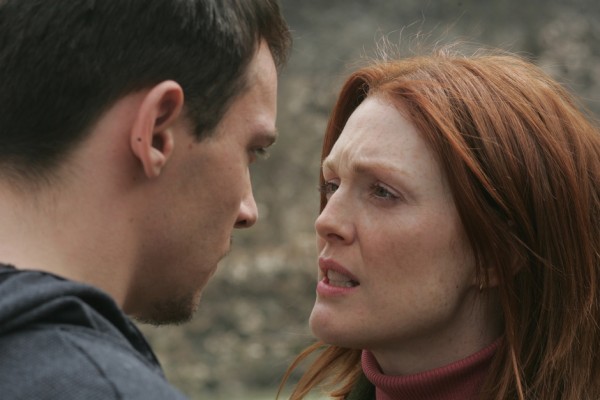