The title of “Don’t Stop Believin’: Everyman’s Journey” is somewhat misleading. An indulgently apportioned look at the classic rock band Journey and their recent reinvention with Arnel Pineda, a Filipino lead singer found through YouTube, director Ramona Diaz’s film takes what could and by all rights should be a fun, engaging fairytale story and stretches it out to near interminable lengths. Two parts shambling tour document and self-congratulatory biography for every one part cross-cultural coming-of-age story, the sporadically lively “Don’t Stop Believin'” is all mic-ed up, but also all mixed up.

When rhythm guitarist Neal Schon pitches Ross Vallory, Jonathan Cain and Deen Castronovo, his fellow original members of Journey, on the notion of Pineda, they’re at first appropriately skeptical. After flying Pineda in for a week-long audition, however, they’re impressed by his chameleonic ability to slip into the high-register nuances of erstwhile lead singer Steve Perry’s voice. They sign him up for a tour, and a-globe-trotting they go.

Diaz chronicles this trip but seems beholden to dual masters, telling the story of the band, in its various iterations, as well as Pineda. Awkwardly, the former isn’t broached until nearly a half-hour into the movie, in a pivot that’s meant to quickly chart the group’s development and changes in tone but comes across as sort of pathetic and douchey (“We made a conscious decision to go to vocally-oriented radio tunes,” says one member). Meanwhile, Pineda’s plucked-from-obscurity story is remarkable enough, but Diaz gives it the full biographical treatment, delving into his adolescent poverty in Manila and (seemingly requisite) battles with drug and alcohol later, as a young man.

This dilutes the film’s potency. And intercut with all of this is a lot of jumbled and repetitive tour footage, highlighting in particular Pineda’s adjustments to life on the road — grappling with head colds, loneliness and the new experience of fans and fame. “Don’t Stop Believin'” doesn’t really qualify as a concert film, given that of the music we see being performed there’s only one, maybe two, numbers done in full. And while the movie tries to address the manner in which Pineda helps make the world a smaller place, by bringing Journey a new and heartily devoted Filipino fan base, it doesn’t fully root down into and invest in an exploration of either the phenomenon of YouTube-spawned singers more broadly (e.g., Justin Bieber) or the notion of geographic and ethnic pride.

This is essentially a glad-handing fan project all the way, which certainly isn’t the worst thing in the world with a bit of clarity of vision. But Diaz’s film — which at 105 minutes could use more than just a little haircut — has no strong editorial point-of-view, and as such it drags and fumbles away one’s attention, like a song on repeat. Truly hardcore Journey fans may well greet it with open arms, but others will stop believin’ in its meaningfulness less than halfway through.

NOTE: In addition to its theatrical engagements, starting this week, “Don’t Stop Believin'” is also available on VOD beginning on March 9. For more information, visit the movie’s website at www.EverymansJourney.com. 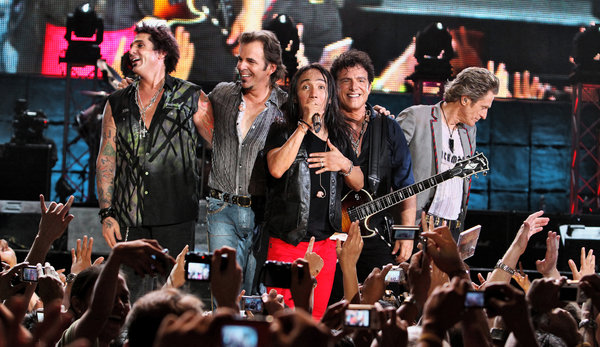