If you, Shockya readers, decide to form a band, I suggest auditioning your siblings. There is an undeniable charm about “family” bands. Just knowing the outfit is a group of brothers and/or sisters, I automatically think “aw” and typically once the band plays, the music is so naturally in-sync it’s hard to forget. My “family bands are awesome” case can be further supported by memorable albums from Kings Of Leon, Oasis (before the Gallagher brawl), Veronicas, Jackson 5, INXS, Bee Gees, My Chemical Romance, Radiohead, AC/DC and 30 Seconds To Mars. I think I’ve made my point.

Los Angeles rock band, Canto, will hopefully fall into these legendary sibling footsteps. The trio of brothers, which consists of Seamus (vocals, guitar), Aidan( bass) and David Blackwell (drums), recently released the official music video for “Dirty Water”, which is off of their upcoming EP, “Ride Away”. The track (“Dirty Water”) is a mock homage to Boston and is the band’s interpretation of the 1966 garage band classic by The Standbells. The sharp melody coupled with deeply layered and edgy vocals revive the 60s classic and situate it nicely in modern times, where garage rock has been on the rise (Thanks to The Black Keys and Foo Fighters). If one play of this music video doesn’t sell you on the brotherly talent of Canto, I am going to just assume you are a fan of Ms. Taylor Swift.

Canto’s new 5-song EP, “Ride Away”, will drop on April 9th. Look out for a free download of the Spring release via the band’s official Facebook Page. 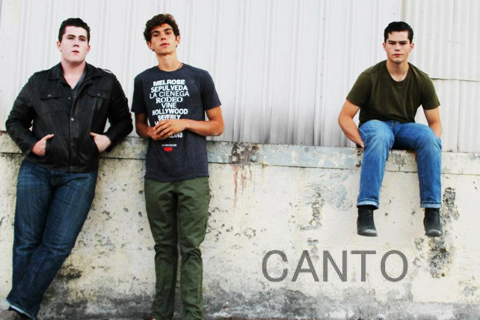