Horror has always been a popular format for anthologizing, both because of its DIY roots and the fact that certain kernels of elemental discomfort often don’t quite rise to the merits of a full-length story or movie. A massive anthology film rooted in those children’s educational books from days of yore, producers Tim League and Ant Timpson’s “The ABCs of Death” corrals 26 short movies from 26 different directors — assigning each a letter of the alphabet and then giving them free reign in choosing a word (or phrase) to encapsulate a story involving death. It’s an interesting idea, certainly, but one that never fully congeals or takes flight, owing to the vast qualitative spread of the offerings.

Of the spread, though, seven were by my count passably entertaining, and only around five others truly superlative. In the former camp, Adam Wingard’s “Quack” uses the very premise of the anthology for a diverting write-around; “Toilet” and “Klutz,” meanwhile, are among a small handful of animated efforts. The cream of the crop were each quite different from one another, but share a penchant for experimentation — the lifeblood of short-form film and video. Bruno Forzani and Helene Cattet’s heady, gorgeously shot, investigational “Orgasm” leaves a mark upon one’s memory, as does Simon Rumley’s grim “Pressure,” a slice of kitten snuff porn. Srdjan Spasojevic’s “Removed” tantalizingly hints at something deeper, while Xavier Gens’ deeply unsettling “XXL” presents a fat girl’s self-immolation. The best effort, though, may just be Marcel Sarmiento’s slow-motion “Dogfight” — a twisted, how’d-they-do-that rendering of an underground death match between man and dog.

It sounds perhaps racist to say, but “The ABCs of Death” could have perhaps benefited from a few more Western voices. A number of entries dote in yawning fashion on weighted topics that are familiar psycho-sexual stand-ins (Japanese schoolgirls, female body taboos), while others — with Nazis and a girl with a tattoo of the exploding Twin Towers on her breasts — seem designed for empty shock. While it’s admittedly utterly foolish to assign aggregate grades across such a wide variety of creative work, the marks below attempt to do just that — providing a doff of the cap to the technical adventurousness of many entries, while also taking into account the array of middling imaginations on display. 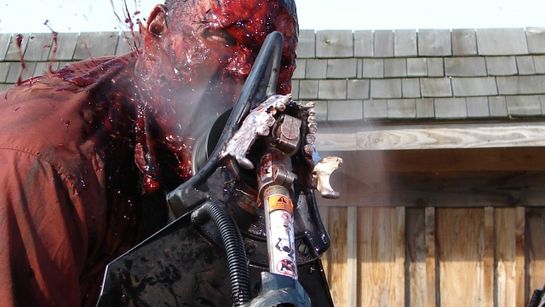