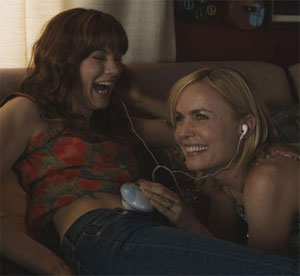 Here’s the power of celebrity being put to use in the best way possible; Radha Mitchell saw something in Jessie McCormack and her script for “Gus,” committed to executive produce the film, do what she could to get it made and now here they are sharing the final product at SXSW.

Mitchell stars alongside Michelle Monaghan as Lizzie and Andie, two best friends with entirely different personalities. Not only is Lizzie more refined compared to Andie’s free-spirited nature, but Lizzie also desperately wants to have a child but can’t conceive while Andie has no interest in having a baby but winds up pregnant after a one-night stand. Andie decides to give her child to Lizzie and her husband, Peter (Jon Dore), and comes to live with them for the duration of her pregnancy. While Lizzie is thrilled to have her best friend around and even more so with the incredible gift she’s giving her, Andie’s lifestyle doesn’t exactly pair well with their own. Further throwing their home into disarray, Peter insists that his brother, Casey (Michel Weston), come to stay with them, too, having just been released from rehab and needing someone to keep an eye on him. Lizzie, Andie, Peter, Casey, Joyce the dog and a baby on the way makes for one very full household.

Having seen “Gus,” it really is no wonder Mitchell felt such a strong attraction to the material. Between its strong female leads, charming comedy and honest drama, “Gus” is a delightful blend of everything resulting in something Mitchell could truly be proud of and also something others should see. Apparently spirits were high after the film’s world premiere, so while we wait for “Gus” to either continue its festival run or possibly snag distribution, hear all about what it took to get the project off the ground, the environment on set, working with an ensemble cast and more straight from Mitchell herself in the video interview below.