Sticking with the original format, “VHS 2” opens with the wraparound component. It features a pair of private investigators on the hunt for a missing kid. Their effort leads them to his home where they sort through journals, his computer and his unusual VHS tape collection, which includes the film’s four subsections – “Clinical Trials,” “A Ride in the Park,” “Safe Haven,” and “Alien Abduction Slumber Party.”

“VHS” vet Adam Wingard returns to bring us piece #1, “Clinical Trials.” Putting a novel and intriguing spin on the found footage concept, his entire film is shot through a bionic eye. After losing his real eye in a car crash, a man has his vision restored by an artificial replacement. The catch is, it’s a clinical trial, so for research purposes, the doctor records everything the man’s new eye captures. The idea of a team of scientists watching him go to the bathroom is disconcerting, but, it turns out, their invasion of his privacy isn’t the problem – it’s the paranormal entities the eye brings into his life that are.

A smart and fresh concept, but a basic execution. Wingard does a stellar job establishing his main man and raising intrigue by tapping into this parallel universe only accessible via the artificial technology, but rather than dig deeper into that, he sticks with the paranormal jump scares we’ve seen time and time again. They do work and “Clinical Trials” is loaded with eerie imagery, but Wingard’s got something that’s well worth expansion, so the choice to trade story layers for quick scares makes the piece satisfying, but less remarkable than it could have been.

Eduardo Sanchez and Gregg Hale have some fun with the used and abused zombie apocalypse scenario with “A Ride in the Park.” Again, some top-notch character development here, the duo doing an excellent job introducing us to our lead and establishing a connection that’s just strong enough to result in some very thoughtful and surprisingly poignant carnage.

We catch all the action from the man’s helmet camera. While on a bike ride in the woods, he stops to help what appears to be a helpless, wounded woman, only to have her turn, bite him and leave him in the same condition she was in – transitioning into a zombie. With the large majority of zombie apocalypse movies involving mass death and hordes of essentially faceless flesh eaters, the opportunity to know what’s at stake for a single man in transition and experience that fateful process with him makes it exponentially more meaningful.

But as solid as “Clinical Trials” and “A Ride in the Park” are, there’s just no avoiding getting steamrolled by “Safe Haven.” This one comes from the perspective of a team of documentary filmmakers trying to expose what’s behind the closed doors of a cult compound. It’s nothing out of the ordinary at first, but once we get passed the character meet and greet and delve into the subject matter of their documentary, things get twisted and incredibly disturbing. And that’s well before even a single drop of blood is shed.

Once all hell breaks loose, “Safe Haven” treads into needing to see it to believe it territory. The latter portion of the piece is just absolutely overflowing with some of the most violent, unsettling visuals that’ll undeniably have you squirming in your seat, and perhaps even having a tough time shaking them off. The piece does conclude with a joke of sorts and while it may not be particularly appropriate for the short itself, it’s one of the most evident instances of something that services “VHS 2” as a whole. The film is frightening through and through, and each and every segment is treated seriously and feels very real, but with “Safe Haven” we do take a turn towards much more disturbing territory, making a transitional element necessary to maintaining a stable tone.

Clearly it’s not easy following up such an overwhelmingly effective massacre, but Jason Eisner handles it well, using his own style to put fun twists on both the sleepover-gone-wrong scenario and alien abductions. Yet again, we’ve got some on-point character development in a minimal amount of time. Rather than jump into the action, Eisner offers a peek at the family’s day-to-day life, or, more specifically, three siblings’ liking of playing pranks on one another. After spending the beginning of the film rooting for one of the three to get the last laugh, it makes for a charming transition to see how the trio comes together to keep each other safe from some unfriendly visitors. Eisner even puts the family dog in the mix and while I may never forgive him for one certain shot, the doggy camera shooting style is unique and effective, offering up a clever point of view, but still leaving the option open for a character to pick up the dog, and throw in different angles on the action to keep the audiences properly orientated.

If you enjoyed “VHS,” “VHS 2” will be a big winner and even if you weren’t feeling round one, the second go-around might surprise you. “VHS” is a solid film, but the sequel is far superior, featuring more innovative scenarios and impressively proficient filmmaking all-around. Should we get a third installment, it’s the wraparound component that’s going to need some major work to raise the bar. Similar to the first film, the narrative is just far too weak not to feel divisive. Should the quality of each segment remain this high and we finally end up with a connecting factor that’s more engaging, perhaps delving into the details of the evil within the VHS tape, the franchise could up its already impressively high standard even further. 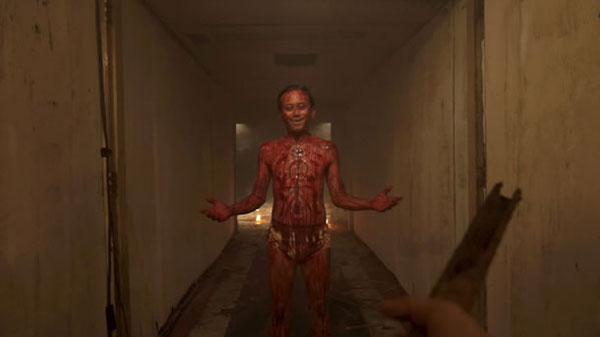