Man want to feel wanted, useful. Mostly by women, in the loincloth, but also, later, by family. This feeling at center of “The Croods,” new animated movie. “Croods” not too complicated. Kind of like cross between “Ice Age” and “Year One,” in some ways. Characters move in funny quadruped/biped hybrid gait, and seem to have invented parkour. But “Croods” tell pleasant story about family, utility of man, and letting go.

Movie open several millions of years ago, which definitely throw Sarah Palin and others for loop. Earth is crazy and inhospitable place, like South to liberals. Croods are cave family. Like, literally. Dad Grug (Nicolas Cage) have unibrow that would impress Anthony Davis. Grug take care of family, which consist of feral baby, stupid son Thunk (Clark Duke) and headstrong daughter Eep (Emma Stone). There is wife, too, Ugga (Catherine Keener), though she do nothing. Almost forgot about her. Oh, and mother-in-law Gran (Cloris Leachman), who is kind of like meth addict version of that witch from “Brave.” Grug secretly always hopes she die, which is funny.

Grug have many mottos like, “Darkness brings death, we know this!” And, “Never not be afraid!” Fear is not the little death for Grug. It keep him alive, he feel. Grug only let family out of cave to help him hunt. Eep, though, seek broader social horizon and meaning in life, which is very confusing to Grug. Eep sneak out, meet Guy (Ryan Reynolds), who have much better hair, less sloping forehead. Guy have baby sun! (This turn out to be called fire.) Guy also have animal belt that talk, which very confusing.

Guy no live in cave, which confuse Grug. Guy also talk of strange place, “tomorrow,” and foretells of end-of-world prophesy, which he maybe picked up from Roland Emmerich movie? Anyway, group separated from cave, so road trip ensue. Crazy things happen. Grug maybe realize some rules primitive, so he tries to find some change he can believe in.

“Croods” co-directed by Chris Sanders — who make “Lilo & Stitch” and “How To Train Your Dragon,” both with big heart — and Kirk DeMicco, who make “Space Chimps.” “Space Chimps” piece of crap, but hey, everyone gotta eat. As on “Dragon,” Sanders use Roger Deakins as “visual consultant” on “Croods.” Good decision. This guy Deakins smart. Helps give film nice look. “Croods” have fantastic array of colorful creatures. “Croods” kind of like a “Flintstones” era cousin of “The Lorax” or something. Its 3-D also not just rip-off — good in scenes of scope, and inventive with dust particles tracking toward camera.

One problem with “Croods” is no real fear of death, or looming consequence. Lots of slapstick-y bits in battles with creatures. (Could use more nut shots, though.) Some slip-ups in wording, too. Grug at one time tell Eep she “grounded,” but how that different than her normal life? “Croods” could be smarter, or have stronger inner logic. It could explore more confused reaction of Croods to entire new world. But it find fun in family dynamic, so viewer not mad.

Some of words characters say funny (“Stay inside the family kill circle!”), and voice acting good. Funny to think about Cage going apeshit with grunts and such in booth. Or maybe he was recorded leaving Romanian nightclub? Anyway, “Croods” tell simple story but do it well. Smaller people like it most. Just no get them talking animal belt for birthday — world not need that. 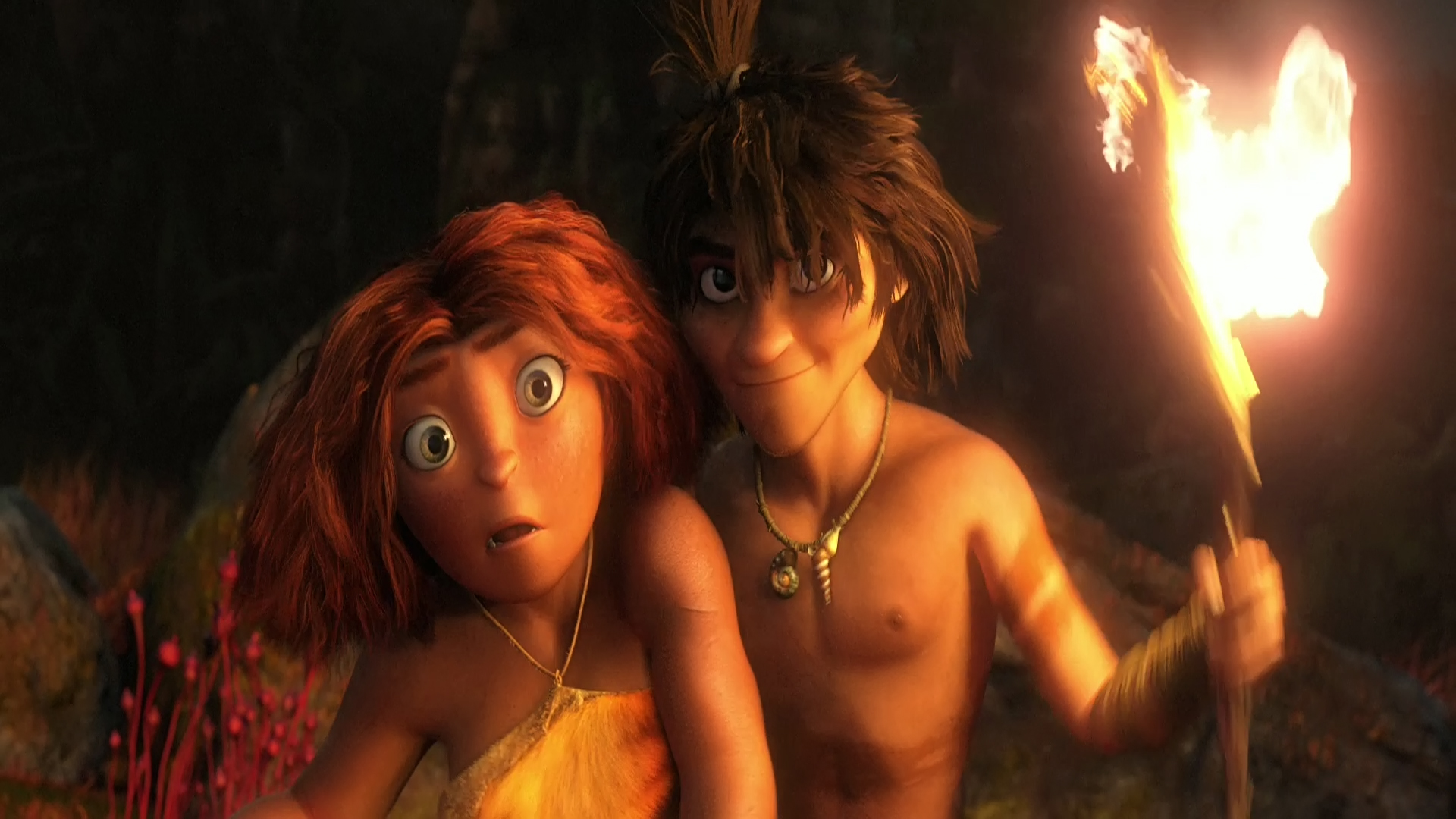