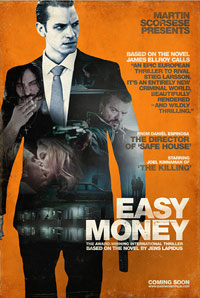 Daniel Espinosa’s “Snabba Cash” (“Easy Money”) enjoyed a lengthy international rollout before finally hitting theaters domestically in the summer of 2012 and now it’s finally time to bring all the drug and organized crime action home because the film is due for a DVD release on Tuesday, March 26th.

The film stars Joel Kinnaman as JW, a top tier student at the Stockholm School of Economics. Trouble is, that’s not the only thing JW is up to. He lives a double life as a promising student and up and coming cocaine dealer. Then there’s Jorge (Matias Varela), a fugitive out to get the guys who snitched on him, landing him in prison for taking part in a drug business. Meanwhile, Dragomir Mrsic’s Mrado is hired by those men to take care of that problem for them and kill Jorge. A typical assignment for a professional hit man, but the fact that his eight-year-old daughter comes along for the ride makes this mission particularly difficult.

In honor of the “Easy Money” March 26th DVD release, Shockya.com has the pleasure of debuting an exclusive clip from the film. Check out what happens when Mrado’s top priority must shift from killing Jorge to saving his own daughter in the video below.