In 2003, legendary music producer Phil Spector — the man responsible for the pioneering “wall of sound” technique, and hit songs and albums from everyone from the Ronettes and the Righteous Brothers to the Beatles — was arrested and charged with the murder of Lana Clarkson, a would-be actress found dead at his home. Writer-director David Mamet’s new film, which takes the name of the man and bows this weekend on HBO, is a snapshot of part of Spector’s first murder trial, which would result in a hung jury, followed by a conviction in 2009.

Mamet’s film has already drawn some flak, and probably deservedly so, for a pre-title card posturing that “Phil Spector” is a work of fiction, and “not based on a true story.” This is a rather audacious claim (not the least given the title of the work), and if anyone other than the Pulitzer Prize-winning Mamet was front-and-center attempting to peddle this particular line of bullshit, it would certainly be more roundly debated and likely more widely derided. So almost from the get-go, one has their head cocked and brow arched watching “Phil Spector,” the willful obstinance of its purposefully hypothetical and blinkered construction evident from early frames.

I can’t speak to the claim that a few critics who covered the real-life trial(s) have had — that the movie soft-peddles some of the evidence in order to paint Spector in a more favorable light — but “Phil Spector” is a movie that certainly goes to considerable lengths to very much avoid being about the time period during which it is set. As such, it’s a strange thing — a film that at times feels like it’s trying to cancel out the very reason for its existence. It’s most definitely not a biography, but neither is “Phil Spector” a courtroom drama, or even a compressed character study.

When original lead defense attorney Bruce Cutler (Jeffrey Tambor, in the Richard Jenkins role) seemingly can’t fully devote his time and energy to the Spector case, he brings in Linda Kenney Baden (Helen Mirren, replacing Bette Midler, who had to withdraw after shooting commenced due to back problems). She’s at first hesitant to commit, both because she’s physically sick and has an overseas vacation already on the schedule. But Linda eventually relents and mounts a passionate defense, grappling with notions of reasonable doubt and juror prejudice — the latter by way of some interesting scenes of legal focus group research.

At the core of the movie is Linda’s relationship with Spector (Al Pacino), who’s potentially an egomaniac and certainly an autodidact given to pretentious, wheel-spinning pontification (“First time you got felt up — guess what?! You were listening to one of my songs”). Much of “Phil Spector” unfolds out of the courtroom, but it has the feeling of a series of lectures and monologues, unconnected to much of unifying substance. (The production design, which arguably succeeds in capturing the idiosyncrasies of Spector’s residence, seems to alternate starkly between the baroque and the austere.) Mamet’s vision of events is tightly focused — almost too much so at certain times, putting Linda in a hermetically sealed bubble every bit as much as her client, absent the input of other characters.

What makes “Phil Spector” work at least a little bit is the magnetic watchability of its two leads — even if their dances often seem to amount to two solos rather than a duet. Pacino captures Spector’s mercurial brilliance, and Mirren a steadfast commitment to the principles of the law. The final act also catches fire, as the film works its way toward Linda’s begrudging acceptance of the fact that she might have to put her eccentric client on the stand if she wishes to introduce certain evidence and argue a particular theory regarding his innocence. A contentious mock cross-examination (with Chiwetel Ejiofor) registers powerfully, and if the idea of the dramatic revelation of Spector’s frizzy afro — a homage to Jimi Hendrix, he insists — seems silly as a payoff, well, Mamet makes it work. And that was based on a true event, actually.

NOTE: For more information on the film, visit HBO’s Facebook page, and/or check your HBO listings. 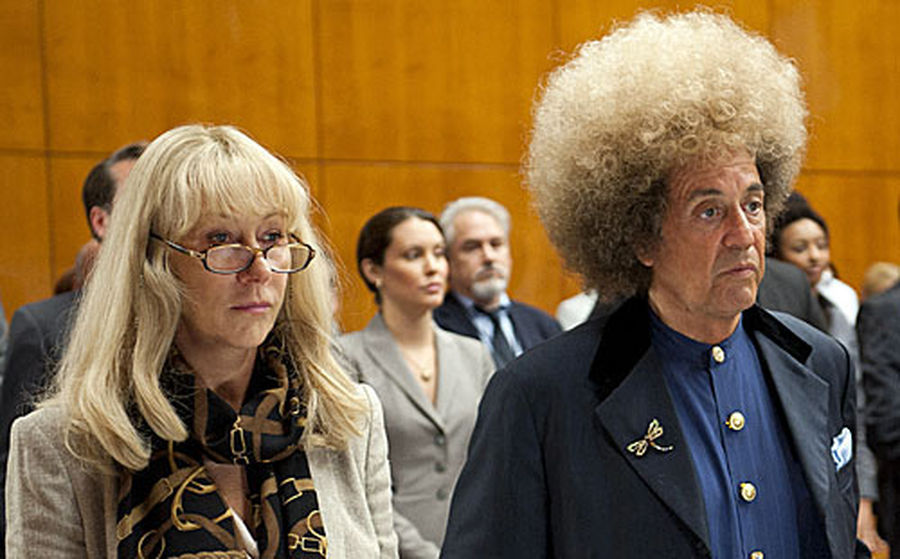