Title: The Place Beyond the Pines

“The Place Beyond the Pines” is long and often feels like it, but your time and attention is ultimately well rewarded through thoughtful, tense and moving scenarios that culminate in a very satisfying and well-earned conclusion.

Ryan Gosling’s Luke works as a motorcycle stunt performer at a traveling carnival. The ladies love him, but Luke’s got his eye on just one, Romina (Eva Mendes). During his annual stop in Schenectady, New York, Luke tries to rekindle their romance, but winds up finding out that while he was on the road, she gave birth to his son. Desperate to contribute and support his baby boy, Luke quits the carnival and repurposes his motorcycle riding abilities to robbing banks.

Then there’s Avery (Bradley Cooper), a law school graduate-turned-police officer. He’s got all the potential in the world, but a run-in with a dirty cop (Ray Liotta) sours his budding career and even his relationship with his wife (Rose Byrne) and son.

Co-writer and director Derek Cianfrance presents the tale in a three-stage process. The first hour is highly successful, painting a fascinating picture of Luke’s unusual life as a stunt performer. Cianfrance puts us in his shoes right from the start and in the best way possible – he let’s us walk into a stunt performance from Luke’s perspective. The crowd loves him and you can feel it. Then, as rough and tough as Luke may be, Gosling successfully softens him with his baby face (minus the face tattoo) and calm demeanor. However, as we get closer to the character, that tranquility becomes increasingly unnerving, offering up a remarkable variety of conflicting emotions towards him.

It can be a little jarring to readjust to a new protagonist, especially after getting to know Luke on such a deep level, but, soon enough, Cooper earns your compassion and, before you know it, you’ll be rooting for another main man. However, just like Luke, while Avery may come across like a standup guy, he’s got some serious issues. Both Cooper and Cianfrance continuously make the audience recognize these flaws, making “The Place Beyond the Pines” something you can engage with.

A good deal of the satisfaction that comes from the film is the reveal of where the plot goes next, so in an effort not to spoil the effect, I’ll skip the synopsis, but will point out that Dane DeHaan absolutely lights up the tail end of the film with fitting support from Emory Cohen.

Generally, the performances in “The Place Beyond the Pines” are all top notch. Gosling is the clear standout, but Cooper holds his own, managing to sell a rather inflated character arc. Byrne has a nice moment at the dinner table with Avery and his police buddies, but otherwise, is entirely underused whereas Mendes gets quite a bit of screen time yet comes across as the slightest bit melodramatic. Ben Mendelsohn’s Robin Van Der Zee makes for an excellent supporting character. His kookiness makes him exceptionally colorful, but Robin also comes with a more serious side that functions to highlight new pieces of Luke. Liotta is also notable as the truly unnerving detective Deluca. Avery may be a respectable cop, but with such a powerful performance from Liotta, Avery’s decisions stemming from Deluca’s bullying become wholly justifiable.

“The Place Beyond the Pines” is also quite the technical achievement. Cianfrance and cinematographer Sean Bobbitt both have a superb handle on the material, showing off the ability to make you feel as though you’re with the appropriate character or even just honing in on the proper prop or bit of action. The visuals are also thoughtfully connected throughout the piece, Cianfrance and Bobbitt recycling shots to draw connections between key plot points. The film is also a big winner with sound design. In fact, the audio of the film is frequently just as profound and hard-hitting as the visuals. The score is bold and always enhances a moment without overpowering it while sounds like Luke’s motorcycle revving are well intertwined with the music and also smartly used to aid scene transitions.

“The Place Beyond the Pines” clocks in at a whopping 140 minutes and it can feel like it, but between the sounds, visuals and performances, it also has a mesmerizing quality, so while your mind may wander for an instant, particularly during the second half of the piece, there will always be something to pull you right back in. 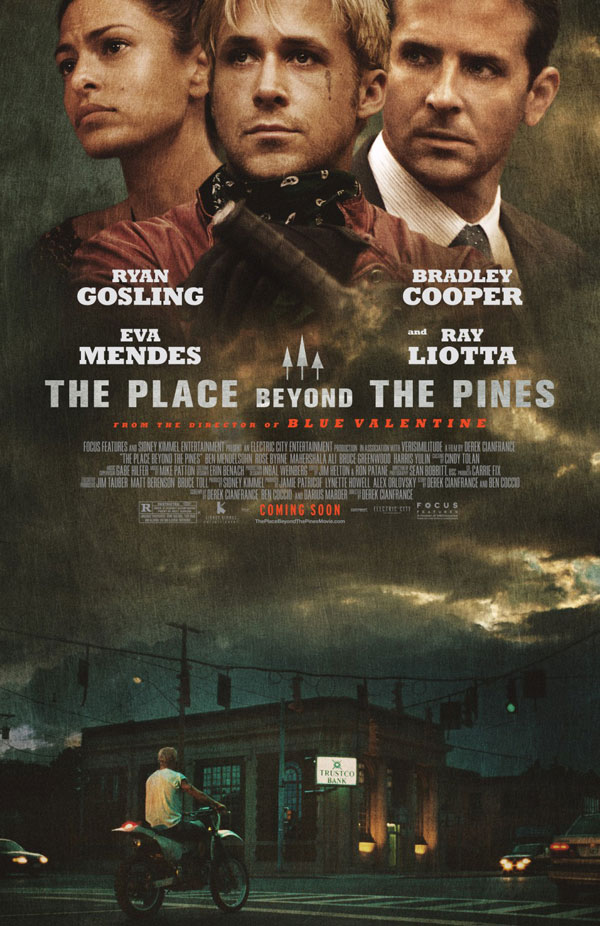 The Place Beyond the Pines Poster