In addition to his evocative showcasings of oddballs and outcasts, writer-director Harmony Korine’s work has always exuded a strong sense of place, and in his latest film, the audacious, neon-infused “Spring Breakers,” the often confrontational auteur transforms St. Petersburg, Florida into a decidedly modern synth-pop mélange of ecstatic heaven and drugged-out hell. In knee-jerk fashion, detractors will take aim at Korine’s proudly prurient work as an empty glorification of brainless adolescent posturing, but it’s actually a rich, smartly tied together provocation — an allegory for the corruption of innocence and the fear of blossoming female sexuality, powered by a hallucinatory musical score from “Drive” composer Cliff Martinez and the throbbing electronic dance music of Skrillex.

Good girl Faith (Selena Gomez) has been friends with Candy (Vanessa Hudgens), Cotty (Rachel Korine, Harmony’s wife) and Brit (Ashley Benson) since grade school. Bored at college, they anxiously await their spring break vacation, but are short on cash. So with Cotty driving getaway, Candy and Brit rob a restaurant. From there, loot in hand, the girls head off to Florida, where pastel scooters and all manner of bikini-clad debauchery awaits. After a police bust lands the girls in jail, they’re bailed out by a local drug peddler/rapper/arms dealer, Alien (a delightfully skeevy James Franco, sporting an assortment of braids, tattoos and garish jewelry), looking for some angels. Faith is unnerved by his scuzziness, but the other girls gravitate toward Alien’s wealth and outlandish displays of machismo, as well as the danger he represents, unwittingly getting sucked into a turf battle between Alien and his former friend and mentor.

From its poppy, peppy opening — with heaving bosoms, the shotgunning of much beer and the fellating of popsicles — on through much darker terrain, “Spring Breakers” exudes a stylistic adventurousness of a certain piece with something like Oliver Stone’s “Natural Born Killers” (a film that, thematically, feels like something of a cousin), even though it’s shot, by Belgian cinematographer Benoît Debie (“Enter the Void”), entirely on celluloid. Korine is intent on making viewers never forget that they’re watching a movie, and in having to jointly process that, the actual narrative and the sheer, careening joy and swagger of its overall packaging, consider the folly of slick, guns-and-tits entertainment.

Korine doesn’t really take a traditional approach to character development; he trades here largely in snapshot moments, and embraced attitudes and wild gestures. It’s not for nothing that Faith is seen getting “jacked up on Jesus” at a church youth group meeting, while another character repeats over and over, “Just pretend you’re in a videogame, act like you’re in a movie or something.” In taking aim at the impact of entertainment and pop culture, as well as its hypocrisy and some of its more soul-deadening qualities, Korine offers up his most compelling and fully rounded collection of characters yet. In “Spring Breakers,” he threads the needle between character specificity and stand-in attributes.

In one of the film’s more memorably quotable passages, Alien — an avatar of materialistic ignorance — holds forth as a New Age Scarface, ranting in sing-song fashion about his various possessions. It’s a call-back of sorts to a moment earlier in the movie, when Candy, literally rolling in stolen cash, opines that “money makes [her] pussy wet, and tits look bigger.” In offering up this portrait of girls gone really wild — with unicorn ski masks and semi-automatic weapons — Korine is reflecting in exaggerated fashion the abundant, free-flowing energy of youth culture, and specifically toying with the overwhelming feelings of panic and uncomfortableness that assertive women coming into their own sexually ripeness engender. It’s an exercise in gonzo metaphor that triggers tripwires of both titillation and alarm. 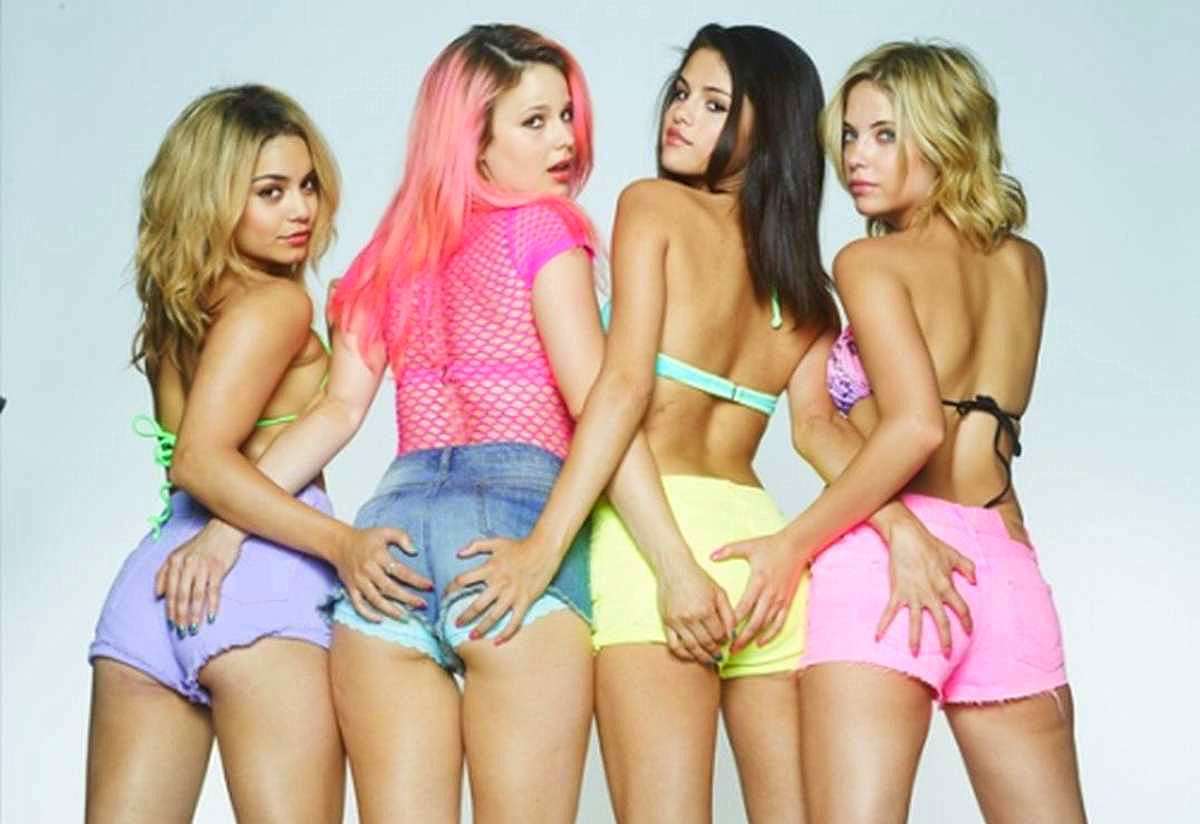