How do you punish a wicked stepmother? Why, give her the silent treatment of course. To put everyone on an equal footing, however, director Pablo Berger, whose “Torremolinos 73” deals with an encyclopedia salesman and his wife who make an adult movie, gives everyone the silent treatment. Perhaps this is because “Blancanieves” is a silent film, paying homage to the 1920s silent pics in Europe, just as “The Artist” does likewise for Hollywood’s age of silents. Yet another reimagining of the Brothers Grimm fairy tale “Snow White,” “Blancanieves” takes part in Southern Spain, particularly in Seville, during the late 1920s, giving the era a romantic look despite the four deaths that take place in this story—two through violence, another pair done in not too pleasantly either. Oh, and one chicken and a temporary death by the heroine.

Much of this version is set in the bullring where matador Antonio Villalta (Daniel Giménez Cacho) gets gored moments after saluting his pregnant wife Carmen (Inma Ciesta) in the stands. Distracted by the flash of a camera, he is sent severely wounded to a hospital while his lovely wife dies agonizingly in childbirth. You can almost not blame him for rejecting his daughter, Carmencita (Sofía Oria) while his fame and riches motivate his nurse, Encarna (Maribel Verdú) to snuggle up to him and gain an introduction to high society upon their marriage. When Carmencita’s grandmother and caretaker (Angela Molina) dies while showing off her flamenco steps, Encarna takes Carmencita to live in a sumptuous manor, making her a hewer of wood and drawer of water despite the presence of servants. Banning her from the second floor where the wheelchair-bound father wastes away, Encarna makes her stepdaughter’s life hell.

When Carmencita now a teen (Macarena García) escapes an attempt on her life, she is informally adopted by a troupe of dwarfs, i.e. 7 enanitos, who teach her to fight bulls while her stepmother camps it up back at the finca by treating her chauffer and lover like a dog.

“Blancanieves” is a bold thrust into the “Snow White” legend, staying true to the outlines of the Grimm Brothers’ violent fairy tale though substituting a pool for the mirror mirror on the wall and taking other liberties. The result is an entertaining, thoroughly professional work mixing dark humor with moments of levity, the atmosphere spirited by a dizzying array of music highlighting paso doble for the bull ring and flamenco sounds that allow various members of the cast spontaneously to strut their stuff. In the starring role as chief villain, Maribel Verdú has an impressive acting résumé including some favorite films of mine, “Y tu mamá también” and “Goya in Bordeaux.”

“Blancanieves” was Spain’s entry into the U.S. Oscar race for Best Foreign Language Film (though the language is entirely on title cards). As it opens in the U.S. in March 2013, the movie would be eligible for a host of awards this year from groups of critics (such as from the prestigious New York Film Critics Online) with an emphasis on the use of music. 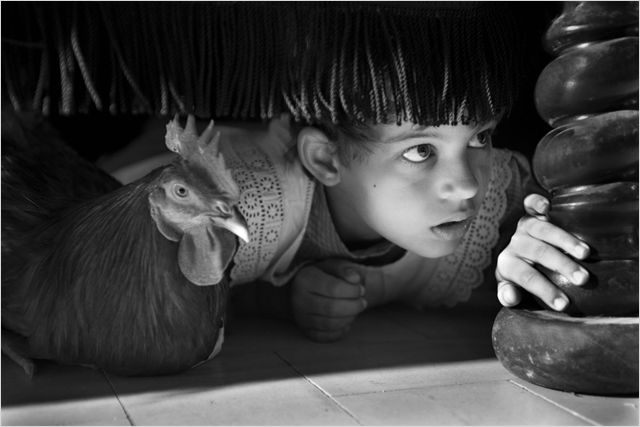