“Muriel’s Wedding” director PJ Hogan and star Toni Collette reunite to considerably less winning effect with “Mental,” a mad, garrulous little slice of alt-nanny comedy. As imaginative as it is indefatigable, the film nonetheless puts an overall unconvincingly quirky Australian spin on fractured-family mental health movies like Anna Boden and Ryan Fleck’s “It’s Kind of a Funny Story,” Dustin Lance Black’s “Virginia” and Ryan Murphy’s 2006 adaptation of Augusten Burroughs’ “Running with Scissors.” All three of those tales, among many others, take inspiration from memoirs of coming-of-age amidst mental illness, and touch on parentalized adolescents. “Mental” tries to mine that same terrain for both laughs and drama, but comes across as just frenzied and bipolar.

Unhappy housewife Shirley Moochmore (Rebecca Gibney) copes with the lack of support and perpetual absence of her husband Barry (Anthony LaPaglia), the mayor of small town Dolphins Head, by withdrawing into a fantasy world built around “The Sound of Music” and the happy Von Trapp family. Her five girls are certain she’s nuts, and that they’re not far behind — one self-diagnoses as schizophrenic, the other as a sociopath. With skittish oldest daughter Coral (Lily Sullivan) on the brink of a relationship with surfer-type co-worker Trout (Sam Clark), Barry finally commits Shirley to a mental institution for a stint of indeterminate length. But since he hardly knows his daughters’ names much less how to relate to them, he picks up an eccentric hitchhiker, Shaz (Collette), and tasks her with becoming their nanny and controlling them. Much scene-chewing then ensues, as Shaz, like a foul-mouthed, Mad Hatter Mary Poppins, upends both the girls’ lives as well as their views and opinions of themselves.

Hogan, whose Stateside studio filmography includes “My Best Friend’s Wedding” and “Confessions of a Shopaholic,” has a colorful pop sensibility which trends decidedly toward the manic, and that’s part of his undoing here. “Mental” has a wild, live-wire energy, and comes out of the gate like a freight train; it’s the sort of movie that uses the foleyed sound of a cuckoo clock to underscore a point. The problem is that this full-frontal assault is a bit wearying, and it creates an emotional disconnect that widens to a chasm when, 45 minutes in, the film tries to pivot into more baldly melodramatic territory. There’s no honest attachment to the characters, so “Mental”‘s plays at sympathy ring hollow — if always loudly.

There is some funny material here, including the forced familial freak-out of an uptight neighbor and a scene where Shaz holds forth on Australia’s history as a penal colony and how, while there are certain “control mice” (Kylie Minogue, Cate Blanchett, Nicole Kidman) sent abroad to play nice, most of the entire country is actually insane. But Hogan, in trying to cram in as many autobiographical details and strands as possible, overloads “Mental,” including a needlessly complicated subplot involving Coral’s bearded, avuncular shark adventurer boss, Trevor Blundell (Liev Schreiber). Putting a bow on Shaz’s personal history isn’t a necessity, but down that rabbit hole Hogan ill-advisedly goes.

As Shaz, Collette is a total, gum-smacking force of nature. If there was an Aussie Erin Brockovich giving an audition for a Down Under production of “One Flew Over the Cuckoo’s Nest,” I’d like to see her top this. But “Mental” so prizes sound and fury over rigorous and clear plotting that even Collette can’t off the dramatic lift for which Hogan aims with his third act. Still, if one wants to see the actress light a fart on fire, this may be the only chance they get. Plan accordingly. 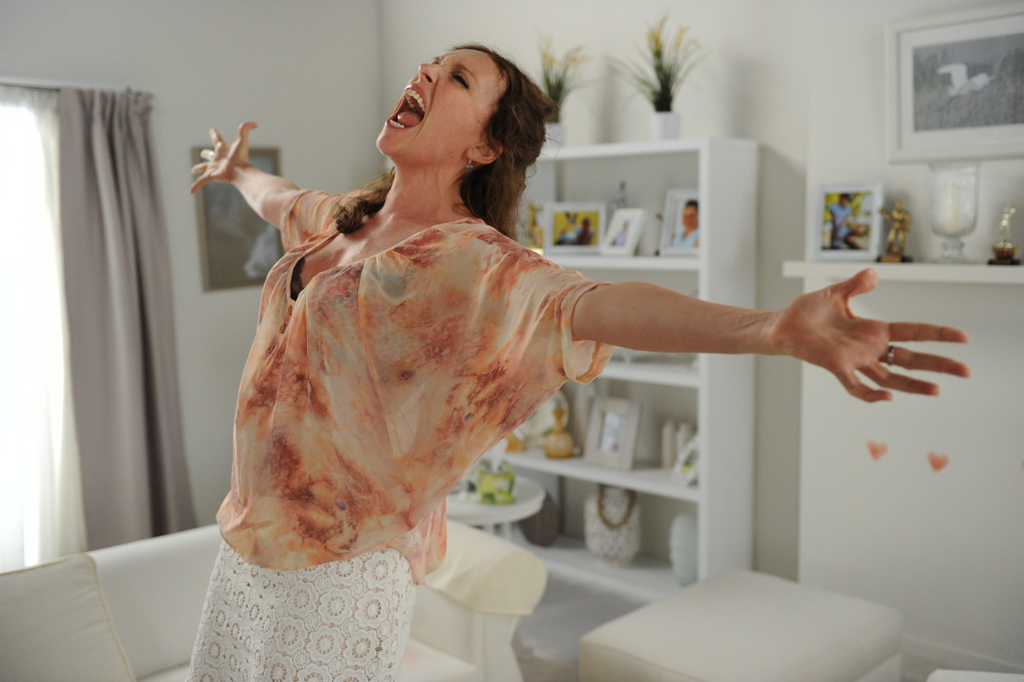