If you can stay with Trance, you could be awakened to what transpires when a director takes on a different and challenging premise.

Danny Boyle guides this mindbender in a fairly straight-forward manner. After an appetizing and compelling opening 30 minutes, the next 15 will have you question whether the intellectually laced twisting angles that are introduced can be properly cultivated by Boyle, the screenwriters (Joe Ahearne and John Hodge), and the engaged cast. But as the opening sentence suggested, if you stay with it, you may unlock a piece of cinematic goodness.

Simon (James McAvoy) works for a prestigious art auction house and monitors security measures for million-dollar paintings. He’s a guy that covers all the angles in order to stay a step ahead of the criminal contingent, all of whom are constantly stewing in the same “out-maneuver” thought process. So when the refined Franck (Vincent Cassel) orchestrates an air-tight scheme to snag a painting from Simon’s joint, a quick-hitting chess match plays out…that may have been rigged.

Yes, this is one of those movies where actions happen on the screen and they might not make sense and/or appear as flawed and choppy storytelling at first glance. But fear not my friends, for answers – that make you give an impressive “Ahhh” – are just around the corner.

A lot of these said answers are drummed up via Elizabeth (Rosario Dawson). She’s a hypnotherapist who helps people remember things and/or provides them with the proper motivation to achieve their wide-range of goals. Now since Franck didn’t achieve his goal, and Simon is the only one who knows where the painting is, the former forces the latter to attend sessions with Elizabeth in order to jog his memory – that took a confusing hit when he got knocked unconscious during the heist.

While the occasional line of reality is blurred in vivid hypnotic sequences, Boyle does not want to confuse the audience. He is simply showcasing how the mind can be manipulated and to discuss how traumatic episodes can alter one’s persona. The three characters rotate acting as test subjects and a variable. For instance, at times it can be Cassel’s character insinuating a variable and the next few sequences will see how the subjects (McAvoy and Dawson) react to that. Other times, it can be Dawson playing the variable card and the two guys struggle through the hand their dealt with. In any event, the rotating puzzle is what separates this from a typical mystery piece, for each character is striving toward their own agenda even though they’re playing within the same set of constrictions.

Pristine mechanical packaging and delivery is something that we’ve come to expect from Boyle (Slumdog Millionaire, 127 Hours). And yes, he manages to live up to those standards again. With the performers seemingly, and ironically, in his head, everything is moving in a fluid motion. And once the ending, which may not seem too well disguised initially, plays out, you’ll experience an urge to watch this again right away. 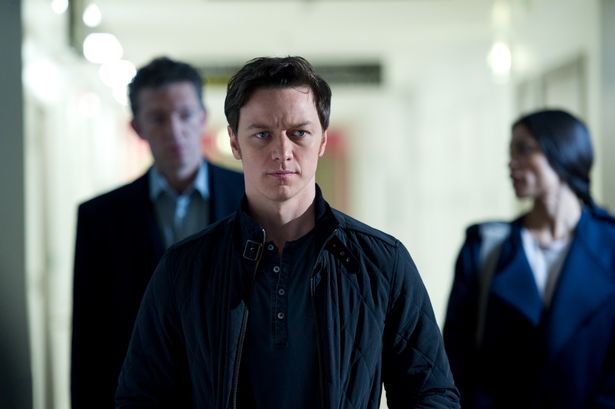