It’s a sad week in the world of film criticism, the industry as a whole, and beyond because we’ve lost the most iconic, influential, dedicated, and inspiring critic, Roger Ebert. Having lost a man who’s touched so many through his love of film, it’s tough to look to the future, but there’s comfort in knowing his presence will still be felt in many respects, whether it’s the continuation of Ebertfest, never-ending campaign to bring back “At the Movies,” or perhaps a personal connection to Ebert or his accomplishments.

That being said, we look to the future while holding firm to the past in your latest Movie News Cheat Sheet. Rest in peace, Mr. Ebert.

1. Bradley Cooper Takes Jude Law’s Spot in “Jane Got A Gun:” First Michael Fassbender dropped out. Joel Edgerton shifted roles to claim the male lead while Jude Law snatched up his vacant villain spot. Then out went director Lynne Ramsey and Law followed, leaving another major role in “Jane Got A Gun” empty yet again – that is until Bradley Cooper stepped in to save the day, as much as a guy playing a ruthless villain can. Natalie Portman leads as a woman with an outlaw for a husband who, one day, comes home peppered with bullet holes. When the gang that tried to finish him off tracks him down, her only choice is to reach out to a former fling (Edgerton) to recruit some help to defend the farm. Cooper is due to step in as Bishop, the leader of the enemy gang. Clearly “Jane Got A Gun” had a tough time getting off the ground, but, in the end, it’s got Portman, Edgerton, and Cooper headlining and Gavin O’Connor behind the lens; maybe things really do happen for a reason. (via Deadline)

2. Jessica Chastain and Benedict Cumberbatch Join “Crimson Peak:” Guillermo del Toro already locked Emma Stone and Charlie Hunnam for his upcoming haunted house thriller, “Crimson Peak,” but now he’s adding yet another pair of industry heavyweights, Benedict Cumberbatch and Jessica Chastain. The film is being described as a “gothic horror story” about a woman who realizes she might not know her husband as well as she thinks. No word on who’s playing who, but news of Cumberbatch’s casting comes for THR and Variety is responsible for confirming Chastain’s involvement. Shooting isn’t set to begin until February 2014, so perhaps more details will surface as the start date draws near.

3. Zoe Saldana is “Guardians of the Galaxy’s” Gamora: “Avatar,” “Star Trek,” and now “Guardians of the Galaxy?” Zoe Saldana might be the queen of deep space franchises. As reported by THR, Saldana is currently in negotiations for the role of the green-skinned Gamora in James Gunn’s “Guardians of the Galaxy.” She’s the last of her species and was raised to function as a weapon. She’s got superhuman strength and agility, healing powers, and is a trained martial artist. Should Saldana sign on the dotted line, she’ll join Chris Pratt as Star-Lord and Dave Bautista as Drax the Destroyer, leaving Groot and Rocket Raccoon the last major roles to be filled ahead of the June start date, which would put the film on track for an August 1, 2014 release.

4. Will Arnett Takes Secret Role in “Ninja Turtles:” Now that Pete Ploszek, Jeremy Howard, Noel Fisher and Alan Ritchson are all locked to bring the Teenage Mutant Ninja Turtles back to life motion capture-style alongside Megan Fox’s April O’Neil, it’s on to the franchise’s other major roles – possibly. According to THR, Will Arnett is the latest to join Jonathan Liebesman’s live-action/CG “Ninja Turtles,” but his role is being kept top secret. “Ninja Turtles” is still without a Splinter, Shredder, and Casey, but the article notes that the latter is not an option for Arnett. Unless they’ve added another major role to the roster, it’d be surprising if Michael Bay, Platinum Dunes, and co. cast a role other than those three mentioned first, but Arnett’s stature and voice aren’t prime Splinter material and, even with the sharp getup, it’d be tough to picture him as a truly threatening Shredder.

5. “Finding Dory” Heading Towards 2015 Release: After having been on quite the adventure, it’s tough imagining Nemo being careless enough to get snatched up by divers yet again. However, considering Dory’s short-term memory loss, it’s totally possible for her to swim in place, do a 360, and have no clue where she’s wound up, making “Finding Dory” a very appropriate trajectory for the “Finding Nemo” series. Andrew Stanton is due to return to direct the piece that’s said to take place about a year after “Finding Nemo” and feature Marlin, Nemo, the Tank Gang, and more familiar faces. Ellen DeGeneres is so thrilled to reprise the role she joked, “I’m not mad it took this long. I know the people at Pixar were busy creating ‘Toy Story 16.’ But the time they took was worth it. The script is fantastic. And it has everything I loved about the first one: It’s got a lot of heart, it’s really funny, and the best part is—it’s got a lot more Dory.” Disney-Pixar has set “Finding Dory” for a November 25, 2015 release. (via ComingSoon.net)

6. Chloe Moretz and Nicholas Hoult for “Dark Places:” After playing a high school student with telekinetic powers and a zombie with a heartbeat, Chloe Mortez and Nicholas Hoult keep it, well, dark, by moving on to Gilles Paquet-Brenner’s “Dark Places.” Based on Gillian Flynn’s book, the film stars Charlize Theron as Libby Day, a woman whose mother and two sisters were killed when she was just seven-years-old. Soon thereafter, a young Libby pinpoints her 15-year-old brother, Ben, as the killer, and he’s shipped off to prison. Twenty-five years later, Ben is still in jail and Libby is confronted by an organization called The Kill Club, a group hoping to finally set Ben free. According to Deadline, Hoult is on board to play Lyle, the treasurer of the Kill Club, but the outlet can only confirm that Moretz will play a character named Diondra, not how she fits into the story.

7. William H. Macy Gets Crudup, Yelchin, Gomez and Fishburne: William H. Macy is due to make his directorial debut and he’s amassing quite the cast to back him up. Not only will he and Felicity Huffman star in the musical drama, but Billy Crudup, Anton Yelchin, Selena Gomez, and Laurence Fishburne are on board, too. “Rudderless” focuses on a father reeling from the passing of his son. However, after stumbling upon a box of his son’s original music, he’s inspired and forms a band of his own to help him cope with the loss. Macy is due to get behind the lens in April when principal photography kicks off in Oklahoma. (via ComingSoon.net)

8. Remembering Roger Ebert: On April 2, 2013, Roger Ebert posted “A Leave of Presence” on his Chicago Sun-Times blog announcing a need to slow down due to a “painful fracture” that turned out to be cancer. However, just two days later, the Sun-Times announced that their (and our) beloved movie critic of 46 years had passed away. While I never had the good fortune to cross paths with Ebert, as a budding critic since 2008 and a film fanatic all my life, his influence has been ever-present. However, Ebert’s impact has been more profound than ever since his Twitter feed and blogging literally made him part of my life on a daily, and often hourly basis. The aforementioned blog noted numerous ways his work, events, and inspiration will carry on even as he begins to step back. Even though he’s no longer with us to see those plans come to fruition, it’s highly likely that his wife, colleagues, and immense following will still forge on with his influence and guidance leading the way. I know I will.

9. Trailers: “Carrie,” “Raze,” “The Purge:” The trailer for the new “Carrie” certainly suggests Kimberly Peirce and co. stick close to the source material and that begs the question, where will this film pop and prove the story is worth retelling? Considering this promo really only modernizes what we’ve already seen, we won’t find the answer here. Speaking of female-driven violence, we’ve also got the brand new trailer for the Tribeca Film Festival entry “Raze.” The piece is a little weak on dramatic character development, but certainly puts the film’s hook in the spotlight and considering that involves Zoe Bell fighting her way out of a mass kidnapping scenario, it totally works. Sticking with the theme of sheer terror and brutality, we wrap this section up with the new trailer for “The Purge.” It falls just short of making the scenario seem sensible, but this night of no laws and the chance to release the hatred that’s built up via robbery and violence is presented in such a freaky and truly disturbing manner that it’ll stick with you well enough to make you eager to find out how the whole thing plays out.

10. Box Office: “Evil Dead” delivered on gore and was rewarded in cold, hard cash. The remake hit it fairly big, taking a total of $26 million on an $8,595 per theater average, already putting it in the green. However, while “G.I. Joe: Retaliation” managed to hold on rather strong, dropping just 47.9% for another $21.1 million, its $86.7 million domestic total is still a ways away from its $130 million production budget. Meanwhile, “The Croods” continues to inch its way down the charts. The film followed its 38.8% weekend one to two drop with a mere 21% dip, letting it take another $21.1 million to the bank in weekend three. “Jurassic Park 3D” came in at #4 with $18.2 million and decent 6,585 per theater average while “Olympus Has Fallen” closes out the top five by holding strong and maintaining just over 70% of its weekend two profits for a $10 million third weekend out. (via Box Office Mojo) 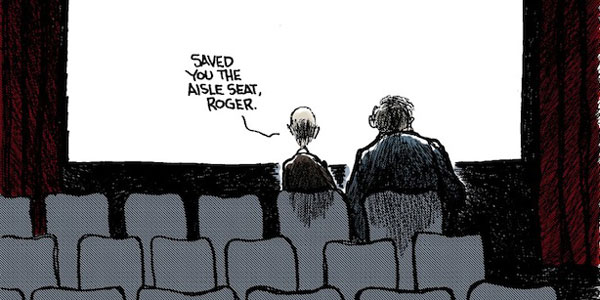